Items related to Ariel: The Restored Edition: A Facsimile of Plath's... 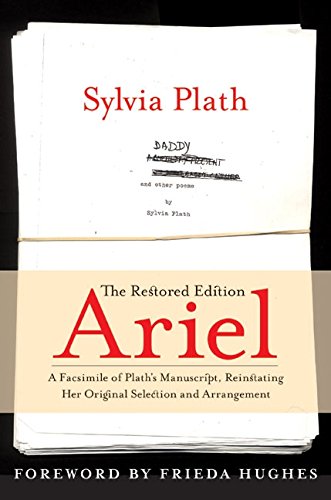 Sylvia Plath's famous collection, as she intended it.

When Sylvia Plath died, she not only left behind a prolific life but also her unpublished literary masterpiece, Ariel. When her husband, Ted Hughes, first brought this collection to life, it garnered worldwide acclaim, though it wasn't the draft Sylvia had wanted her readers to see. This facsimile edition restores, for the first time, Plath's original manuscript—including handwritten notes—and her own selection and arrangement of poems. This edition also includes in facsimile the complete working drafts of her poem "Ariel," which provide a rare glimpse into the creative process of a beloved writer. This publication introduces a truer version of Plath's works, and will no doubt alter her legacy forever.

Sylvia Plath churned out her final poems at the remarkable rate of two or three a day, and Robert Lowell describes them as written by "hardly a person at all ... but one of those super-real, hypnotic, great classical heroines." Even more remarkable, she wrote them during one of the coldest, snowiest winters (1962-63) Londoners have ever known. Snowbound, without central heating, she and her two children spent much of their time sniffling, coughing, or running temperatures (In "Fever 103°" she writes, "I have been flickering, off, on, off on. / The sheets grow heavy as a lecher's kiss."). Pipes froze, lights failed, and candles were unobtainable.

As if these physical privations weren't enough, Plath was out in the cold in another sense--her husband, Ted Hughes, had left her for another woman earlier that year. Despite all this (or perhaps because of it), the Ariel poems dazzle with their lyricism, their surprising and vivid imagery, and their wit. Rather than confining herself to her bleak surroundings, Plath draws from a wide array of experience. In "Berck-Plage," for instance, clouds are "electrifyingly-coloured sherbets, scooped from the freeze." In "The Night Dances," the poet stands crib-side, reveling in her son's own brand of do-si-do: "Such pure leaps and spirals--Surely they travel / The world forever, I shall not entirely / Sit emptied of beauties, the gift / Of your small breath..."

Though at times they present the reader with hopelessness laid bare, these poems also teem with the brightest shards of a life, confounding those who merely look for the words of a gloomy, dispassionate suicide. Plath rose each morning in the final months of her life to "that still blue, almost eternal hour before the baby's cry" and left us these words like "axes/After whose stroke the wood rings..."

Upon the publication of her posthumous volume of poetry, Ariel, in the mid-1960s, Sylvia Plath became a household name. Readers may be surprised to learn that the draft of Ariel left behind by Sylvia Plath when she died in 1963 is different from the volume of poetry eventually published to worldwide acclaim.

This facsimile edition restores, for the first time, the selection and arrangement of the poems as Sylvia Plath left them at the point of her death. In addition to the facsimile pages of Sylvia Plath’s manuscript, this edition also includes in facsimile the complete working drafts of the title poem, "Ariel," in order to offer a sense of Plath's creative process, as well as notes the author made for the BBC about some of the manuscript's poems.

In her insightful foreword to this volume, Frieda Hughes, Sylvia Plath's daughter, explains the reasons for the differences between the previously published edition of Ariel as edited by her father, Ted Hughes, and her mother's original version published here. With this publication, Sylvia Plath's legacy and vision will be re-evaluated in the light of her original working draft.

Ariel: The Restored Edition: A Facsimile Of Plath's Manuscript, Reinstating Her Original Selection And Arrangement