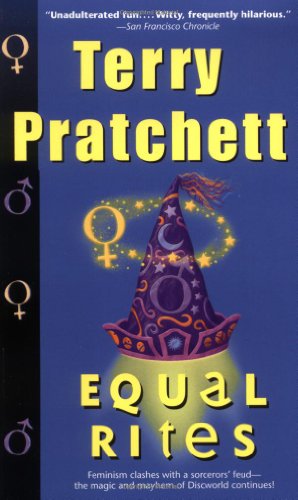 Terry Pratchett's profoundly irreverent novels, consistent number one bestsellers in England, have garnered him a revered position in the halls of parody along with Mark Twain, Kurt Vonnegut, Douglas Adams, and Carl Hiaasen.

In Equal Rites, a dying wizard tries to pass on his powers to an eighth son of an eighth son, who is just at that moment being born. The fact that the son is actually a daughter is discovered just a little too late...

"A sequence of unalloyed delight" - Guardian

"Truly funny books are very few and far between. Equal Rites is not only fizzy and hilarious, but is also a wonderful story well told ... This is his best book. Highly recommended" - The Good Book Guide

"A delightful. yarn, logically illogical as only Terry Pratchett can write. He's delightful, an utter nutter and funster-punster" - Anne McCaffrey

"You won't stop grinning except to chuckle or sometimes roar with laughter. The most hilarious fantasy since - come to think of it, since Pratchett"s previous outing" - Kirkus Reviews

The last thing the wizard Drum Billet did before Death laid a bony hand on his shoulder, was to pass on his staff of power to the eighth son of an eighth son.  Unfortunately for his colleagues in the chauvinistic (not to say misogynistic) world of magic, he failed to check on the new-born baby's sex...