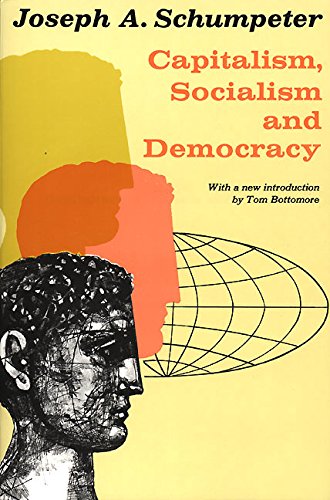 "This book is notable in more than one respect. The author, a leading theorist in the field of pure economics, here cuts loose and gathers into the sweep of his analysis psychological, cultural, historical and political considerations which the pure economist is conventionally supposed to shun or to be incapable of handling. The result is a book as meaty and deep-probing as it is broad in its survey of the cultural forces which determine the evolution of institutions, particularly of economic systems. . . .On the whole, this is a 'must' book." - Political Science Quarterly

Joseph A. Schumpeter (1883-1950) served as Austria's first finance minister, made and lost a fortune as an investment banker, and taught economics for many years at Harvard. Capitalism, Socialism and Democracy is his best-known work.

It was not by a slip that an analogy from the world of religion was I permitted to intrude into the title of this chapter. There is more than analogy. In one important sense, Marxism is a religion. To the believer it presents, first, a system of ultimate ends that embody the meaning of life and are absolute standards by which to judge events and actions; and, secondly, a guide to those ends which implies a plan of salvation and the indication of the evil from which mankind, or a chosen section of mankind, is to be saved. We may specify still further: Marxist socialism also belongs to that subgroup which promises paradise on this side of the grave. I believe that a formulation of these characteristics by an hierologist would give opportunities for classification and comment which might possibly lead much deeper into the sociological essence of Marxism than anything a mere economist can say.

The least important point about this is that it explains the success of Marxism. Purely scientific achievement, had it even been much more perfect than it was in the case of Marx, would never have won the immortality in the historical sense which is his. Nor would his arsenal of party slogans have done it. Part of his success, although a very minor part, is indeed attributable to the barrelful of white-hot phrases, of impassioned accusations and wrathful gesticulations, ready for use on any platform, that he put at the disposal of his flock. All that needs to be said about this aspect of the matter is that this ammunition has served and is serving its purpose very well, but that the production of it carried a disadvantage: in order to forge such weapons for the arena of social strife Marx had occasionally to bend, or to deviate from, the opinions that would logically follow from his system. However, if Marx had not been more than a purveyor of phraseology, he would be dead by now. Mankind is not grateful for that sort of service and forgets quickly the names of the people who write the librettos for its political operas.

But he was a prophet, and in order to understand the nature of this achievement we must visualize it in the setting of his own time. It was the zenith of bourgeois realization and the nadir of bourgeois civilization, the time of mechanistic materialism, of a cultural milieu which had as yet betrayed no sign that a new art and a new mode of life were in its womb, and which rioted in most repulsive banality. Faith in any real sense was rapidly falling away from all classes of society, and with it the only ray of light (apart from what may have been derived from Rochdale attitudes and saving banks) died from the workman's world, while intellectuals professed themselves highly satisfied with Mill's Logic and the Poor Law.

Now, to millions of human hearts the Marxian message of the terrestrial paradise of socialism meant a new ray of light and a new meaning of life. Call Marxist religion a counterfeit if you like, or a caricature of faith--there is plenty to be said for this view--but do not overlook or fail to admire the greatness of the achievement. Never mind that nearly all of those millions were unable to understand and appreciate the message in its true significance. That is the fate of all messages. The important thing is that the message was framed and conveyed in such a way as to be acceptable to the positivistic mind of its time--which was essentially bourgeois no doubt, but there is no paradox in saying that Marxism is essentially a product of the bourgeois mind. This was done, on the one hand, by formulating with unsurpassed force that feeling of being thwarted and ill treated which is the auto-therapeutic attitude of the unsuccessful many, and, on the other hand, by proclaiming that socialistic deliverance from those ills was a certainty amenable to rational proof.

Observe how supreme art here succeeds in weaving together those extra-rational cravings which receding religion had left running about like masterless dogs, and the rationalistic and materialistic tendencies of the time ineluctable for the moment, which would not tolerate any creed that had no scientific or pseudo-scientific connotation. Preaching the goal would have been ineffectual; analyzing a social process would have interested only a few hundred specialists. But preaching in the garb of analysis and analyzing with a view to heartfelt needs, this is what conquered passionate allegiance and gave to the Marxist that supreme boon which consists in the conviction that what one is and stands for can never be defeated but must conquer victoriously in the end. This, of course, does not exhaust the achievement. Personal force and the flash of prophecy work independently of the contents of the creed. No new life and no new meaning of life can be effectively revealed without. But this does not concern us here.

Something will have to be said about the cogency and correctness of Marx's attempt to prove the inevitability of the socialist goal. One remark, however, suffices as to what has been called above his formulation of the feelings of the unsuccessful many. It was, of course, not a true formulation of actual feelings, conscious or subconscious. Rather we could call it an attempt at replacing actual feelings by a true or false revelation of the logic of social evolution. By doing this and by at tributing--quite unrealistically--to the masses his own shibboleth of "class consciousness," he undoubtedly falsified the true psychology of the workman (which centers in the wish to become a small bourgeois and to be helped to that status by political force), but in so far as his teaching took effect he also expanded and ennobled it. He did not weep any sentimental tears about the beauty of the socialist idea.