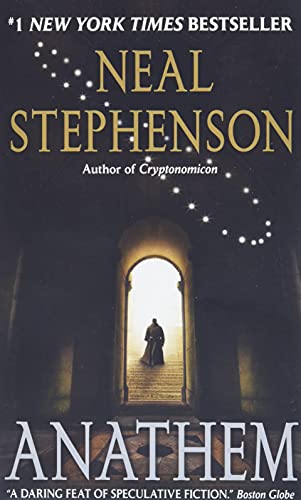 A #1 New York Times Bestseller, Anathem is perhaps the most brilliant literary invention to date from the incomparable Neal Stephenson, who rocked the world with Snow Crash, Cryptonomicon, and The Baroque Cycle. Now he imagines an alternate universe where scientists, philosophers, and mathematicians live in seclusion behind ancient monastery walls until they are called back into the world to deal with a crisis of astronomical proportions.

For ten years Fraa Erasmas, a young avout, has lived in a cloistered sanctuary for mathematicians, scientists, and philosophers, protected from the corrupting influences of the outside world. But before the week is out, both the existence he abandoned and the one he embraced will stand poised on the brink of cataclysmic change—and Erasmas will become a major player in a drama that will determine the future of his world, as he follows his destiny to the most inhospitable corners of the planet . . . and beyond.

Anathem is the latest miraculous invention by the New York Times bestselling author of Cryptonomicon and The Baroque Cycle—a work of astonishing scope, intelligence, and imagination.

Neal Stephenson is the bestselling author of the novels Reamde, Anathem, The System of the World, The Confusion, Quicksilver, Cryptonomicon, The Diamond Age, Snow Crash, and Zodiac, and the groundbreaking nonfiction work In the Beginning . . . Was the Command Line. He lives in Seattle, Washington.