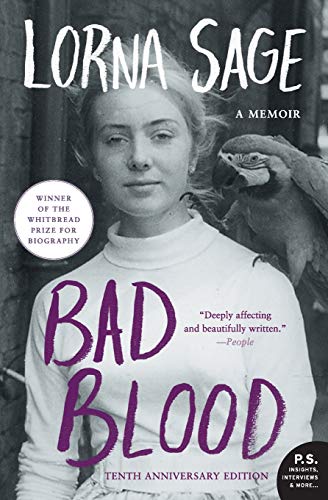 Bestselling author Lorna Sage delivers the tragicomic memoirof her escape from a claustrophobic childhood in post-WWII Britain—and thestory of the weddings and relationships that defined three generations of herfamily—in Bad Blood, an internationalbestseller and the winner of the coveted Whitbread Biography Award. Readers ofbooks like Angela’s Ashes and The Liar’s Club as well as fans ofSage’s own lucid and penetrating writing will be captivated by the book thatthe New York Times Book Review said“fills us with wonder and gratitude. . . . Few literary critics have everwritten anything so memorable.”

Nobody's unhappy family was ever quite like that of Lorna Sage, whose ruthlessly funny, excruciating, inspiring memoir Bad Blood won England's Whitbread Biography Award. She grew up in the '40s on the Welsh border, in the crossfire between her grandparents, a bitter, bibulous, bookish vicar resembling Jack Sprat and his short, "fat doll" of an ignorant wife. He preached earthy sermons about how one might prefer for a wife "Martha before dinner, Mary after dinner." His wife's "notion of marriage [was] that a man signed you up to have his wicked way with you and should spend the rest of his life paying through the nose." Grandma blackmailed the vicar with his diary of adultery, in which she scribbled vicious comments invaluable to the family historian. She gobbled sweets; he drank, fumed, and helped make Lorna Sage a noted literary critic. There is much more: the vicar's affair with his daughter's school chum, the cosmic impact of Bill Haley and his Comets, Lorna's precocious pregnancy, and the strange way lives ricochet and echo each other. Sage manages to give her rural upbringing a brooding Gothic poignance and the comic force of Cold Comfort Farm. She describes a moment after her grandfather's death in the vicarage, "where everything seemed to be wearing thin and getting see-through, as though a spell were dissolving." But the shades of her clan won't quite fade, and thanks to this book, they're here to stay. --Tim Appelo

“The bad blood had missed a generation. You’re just like your grandfather, my mother said.”

Blood trickles down through every generation, seeps into every marriage. An international bestseller and winner of the Whitbread Biography Award, Bad Blood is a tragicomic memoir of one woman’s escape from a claustrophobic childhood in post–World War II Britain and the story of three generations of a family—its triumphs and its darkest secrets.

With wit and a dose of self-deprecating humor, Sage’s prose brings to life in vivid detail a period—the 1940s and 1950s—that continues to influence and shape society in the twenty-first century. As a portrait of a family and a young girl’s place in it, Bad Blood is unsurpassed.