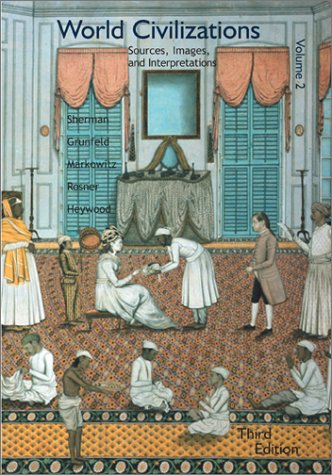 The second in a two-volume anthology of primary, secondary and visual sources, this reader provides a broad introduction to the evolution of World Civilizations from ancient history to 1700, and gives students insight into how historians use and interpret evidence in an effort to broaden their understanding of civilizations around the world. A wide selection of documents, images, maps and charts is presented along with chapter-opening timelines, source introductions, points for consideration, and questions designed to clarify the material and stimulate discussion. The reader is organized chronologically, but also provides an alternate topical Table of Contents, which allows instructors and students to compare sources across cultures and time periods. A new feature to this edition, "Using This Book," assists students in fully analyzing sources and context.

Dennis Sherman is Professor of History at John Jay College of Criminal Justice, the City University of New York. He received his B.A. (1962) and J.D. (1965) degrees from the University of California at Berkeley and his Ph.D. (1970) from the University of Michigan . . He was Visiting Professor at the University of Paris (1978-79; 1985). He has received the Ford Foundation Prize Fellowship, the Council for Research on Economic History fellowship, and fellowships from the National Endowment for the Humanities. His publications include A Short History of Western Civilization, 8th edition (co-author); Western Civilization: Sources, Images, and Interpretations, 5th edition; World Civilizations: Sources, Images, and Interpretations, 2nd Edition (co-author); a series of introductions in the Garland Library of War and Peace; several articles and reviews on nineteenth-century French economic and social history in American and European journals, and short stories on literary reviews.

Gerald Markowitz is professor of history at John Jay College and at the Graduate Center, City University of New York. He is chair of the Interdepartment of Thematic Studies at John Jay. He earned his Ph.D. from the University of Wisconsin (1971) and received grants from the National Endowment for the Humanities (1975-77, 1987-89, 1992-94). His publications include Children, Race, and Power: Kenneth and Mamie Clark's Northside Center (with David Rosner) (1996), Deadly Dust: Silicosis and the Politics of Industrial Disease (with David Rosner) (1991), Dying for Work: Safety and Health in the United States (edited with D. Rosner) (1987), "Slaves of the Depression": Workers' Letters about life on the Job (edited with D. Rosner) (1987), Democratic Vistas: Post Offices and Public Art in the New Deal (with Marlene Park) (1984), The Anti-Imperialists, 1898-1902 (1976), as well as numerous articles and reviews on American history.

David Rosner is Professor of History and Public Health at Columbia University and Co-Director of the new Program in the History of Public Health and Medicine at Columbia's Mailman School of Public Health. He received his M.S. in Public Health from the University of Massachusetts and his doctorate from Harvard in the History of Science and, until recently, was the University Distinguished Professor of History at the City University of New York. In addition to numerous grants, he has been a Guggenheim Fellow, a National Endowment for the Humanities Fellow, and a Josiah Macy Fellow. He has been awarded the Distinguished Scholar's Prize from the City University and recently, the Viseltear Prize for Outstanding Work in the History of Public Health from the APHA. He is author of A Once Charitable Enterprise (Cambridge University Press, 1982; Princeton University Press, 1987), and editor of Archives of Sickness, Epidemics and Public Health in New York City (Rutgers University Press, 1995) and Health Care in America: essays in Social History (with Susan Reverby). In addition, he has co-authored and edited with Gerald Markowitz numerous books and articles, including Children, Race, and Power: Kenneth and Mamie Clark's Northside Center (1996), Deadly Dust: Silicosis and the Politics of Industrial Disease (1991), Dying for Work: Safety and Health in the United States(1987), and "Slaves of the Depression": Workers' Letters about life on the Job (1987). Currently, he and Gerald Markowitz are working on a book on the boundaries between occupational and environmental health for the University of California Press.

Linda Heywood is an associate professor of African history and the history of the African Diaspora at Howard University in Washington, D.C. She received her Ph.D. from Columbia University in 1984. Her publications include Contested Power in Angola, 1840's to the present (2000); Black Diaspora: Africans and the Descendants in the Wider World, Parts One and Two (1988 revised ed., co-editor), and numerous articles on Angolan and African Diasporic history. She is the editor of Central Africans and Cultural Transformations in the American Diaspora (Cambridge, forthcoming), and is co-authoring a study on the first generation of Africans in the Dutch and English speaking Americas.