Items related to The Middle East and Central Asia: An Anthropological...

The Middle East and Central Asia: An Anthropological Approach 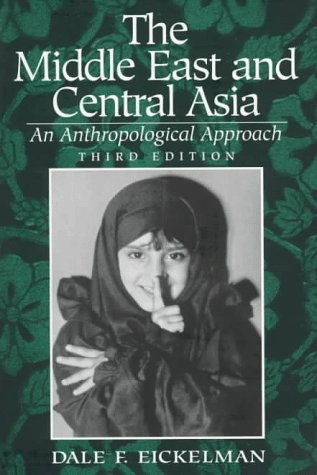 Based on a synthesis of the extensive research of Middle Eastern and Western scholars, this lively anthropological introduction to the Middle East and Central Asia explores the socio-political complexities of the those regions and introduces students to the questions that have been, and are being, developed by scholars and writers concerned with the two regions.

As anthropological scholarship on the major civilizational areas of the world has reached a critical intensity, different themes have emerged in each region that have then influenced ideas elsewhere. Because of the Middle East's complexity and diversity, several interrelated themes prevail. One group of issues is suggested by the study of Islam, Judaism, and Christianity and how these world religions are understood both as global movements and in their rich local manifestations in the Middle East. How do local understandings of Islam, for example, affect the wider currents of social thought and practice? How does a world religious tradition such as Islam shape, and become shaped by, the rapidly evolving economic and political contexts in which it is maintained and reproduced? What are the implications of mass higher education, the proliferation of media, and the greater ease of travel and rapid communication for the ways in which people think about religion and politics?

Another set of issues concerns ideas that people hold about their cultural and personal identities. In a region as complex as the Middle East, with its overlapping linguistic, ethnic, national, kin, gender, and class distinctions, the problems of how personal and collective identities are asserted and what they mean in differing historical and political contexts are especially crucial. With the rise of ethnonationalism and ethnoreligious nationalisms, such identities are at times more plastic and at other times seemingly more fixed than many earlier assumptions concerning their cultural bases have allowed.

A third theme concerns the political contexts and consequences of economic activities—the production, allocation, and consumption of goods and services. Together with practitioners of other disciplines, anthropologists analyze the social and cultural impact of developments such as massive labor emigration from poorer countries, the accrual of oil and mineral wealth to others, urbanization, agricultural innovation, and competition over scarce resources such as water. Anthropologists, like their colleagues in other disciplines, are concerned with what happens to cultural values and social relationships in the context of rapid economic and political change, and with the prospects for more "civil" societies and greater tolerance in the Middle East and Central Asia.

A fourth theme concerns changing interpretations of Middle Eastern and Central Asian societies and cultures by Westerners and by Middle Easterners and Central Asians themselves. This issue, once regarded as a historiographic one related only indirectly to "real" anthropological inquiry, is now considered implicit in any problem in the human sciences. Ideas concerning what constitutes valid description and interpretation of a culture or society have changed dramatically over the last two centuries, especially as modern anthropological inquiry has ceased to be primarily a Western enterprise. A comparison of this fourth edition with the first one, which appeared in 1981, also suggests how anthropology and our understanding of the Middle East have changed over the past two decades.

The first two editions of this book dealt only with the Middle East, a challenging task in itself. For all practical purposes, Central Asia and Azerbaijan were a world apart during the period of Soviet domination, sealed off from adjoining Middle Eastern countries. By the late 1980s, this situation had begun to change. Cross-border cultural and commercial ties between Middle Eastern and Central Asian countries were rapidly created or renewed, and Russian and Central Asian scholars intensified their cooperation with European and American colleagues, often working collaboratively with them.

Central Asia and the Muslim-majority regions of the Caucasus have decidedly different profiles from most countries in the Middle East, but many questions and issues applicable to the Middle East serve as useful points of departure for understanding Central Asia. Islam remains a basic (although not exclusive) element of identity for most people in Central Asia, as did Judaism for a significant (although rapidly declining) minority, in spite of vigorous anti-religious campaigns during much of the Soviet era. The privileged status of the Russian language, the "glass ceiling" for Central Asians in much of the former Soviet bureaucracy, and an economic system weighted toward extracting resources from the region rather than developing it bears many similarities to the colonial situation that prevailed in parts of the Middle East. Finally, exploring the interpretive framework by which Soviets and Russians sought to understand Central Asia and comparing developments in Central Asia with what Moscow-based scholars called the "foreign Muslim East" help us understand better the strengths and weaknesses of our own interpretive frameworks.

The third edition suggested points of departure for understanding Central Asia, especially the rising significance of ethnonational politics and the related "rewriting" of national and ethnic histories by some of the region's intellectuals. This fourth edition brings the account up to date, and for the first time incorporates World Wide Web resources and invites readers to augment this text by using them as well.

This book is intended both as a textbook and as an interpretive essay. It introduces students, colleagues, and general readers to the Middle East and Central Asia and to the questions that have been and are being developed by scholars and writers concerned with the two regions. Although this book is necessarily a synthesis of major research, I seek to develop a particular style of anthropological inquiry and show its contribution to the study of these two complementary regions. Many textbooks are derivative and unconvincing, in that they rarely convey the sense of discovery that leaps from the pages of the more extensive monographs that constitute the central substance of anthropological inquiry. I hope that this book contains the sense of discovery that I felt in creating it and keeping it up-to-date, and that readers will be prompted to explore some of the monographs, articles, and on-line resources mentioned in the text and footnotes. Chapters conclude with an annotated list of further readings and reference materials. The glossary, containing references to the places where terms are discussed in the text, provides an additional resource for comparison. An entirely new element in this edition is a guide to World Wide Web resources, "Internet Resource's for the Middle East and Central Asia."

The manuscript for the first edition of this book was completed on a portable typewriter in the Sultanate of Oman in late 1979. In that politically turbulent year, an informal group of oasis dwellers in a small provincial capital, often including myself, met almost daily for afternoon coffee in the relatively cool date-palm tree gardens. There we compared notes on what we heard and understood of regional politics from shortwave broadcasts in various languages and from what we ourselves saw and heard. These afternoon "news" sessions, devoted to regional and international politics, were as integral a part of oasis life as concern over property and water rights. Topics at that time included the Soviet invasion of Afghanistan, revolutionary Iran, and the November 1979 siege of the Great Mosque in Mecca by militant Muslim radicals. Most of the older tribesmen had firsthand experience of war and rebellion and were fully aware of the fragile political environment in which they lived. It was no luxury to take fragments of information and "news," often recognized as imperfect or suspect, and to assess critically their basic and long-term implications in a manner not unfamiliar to good anthropological reporting and analysis. These "news" sessions, and similar ones conducted during return visits to Oman (and elsewhere) since then, underscored just how intertwined "local" political and economic events were with regional and global ones in the view of Middle Easterners (and Central Asians) from all walks of life.

Political and economic developments since that time have sustained and augmented interest in the Middle East, and interest in Central Asia has blossomed since the end of the Soviet era. Anthropological studies that have appeared since the 1980s reflect more directly than their predecessors how the "background" themes of religious understandings and institutions, kinship and family, loyalty and trust, gender relations, political authority—and the linkages between villages, regions, and states—are linked to the hard surfaces of politics and economics.

My approach is not encyclopedic. For reasons of historical accident and rapidly shifting political climates for research, American, European, Russian, Japanese, Iranian, Arab, Pakistani, Central Asian, and Turkish anthropologists and others have been better able to conduct field studies in some areas than in others. Likewise, the historical development of some countries has focused attention on specific issues. Thus many of the anthropological studies of Turkey by both indigenous and foreign researchers have concentrated on the themes of modernization and nation building, while those of North Africa have been concerned with the continuing impact of the earlier colonial experience. Even if the various countries of the Middle East were known equally well through anthropological studies, there would be little point in attempting a single composite of these materials, any more than such an effort for Africa or Latin America would be intellectually rewarding.

In general, my procedure is to develop specific topics on the basis of the best available documentation for a particular country or region and then to sketch as far as possible how patterns of kinship, political comportment, and the like compare with similar patterns elsewhere in the Middle East. For example, Chapter 4 discusses nomadism, especially through an examination of the A1 Rashid of Saudi Arabia and the Rwala Bedouin of Saudi Arabia and Jordan. They are chosen not because they represent a "lowest common denominator" for nomads in the Middle East but because they have been the subject of anthropological studies sufficiently detailed to form a basis for understanding the role of nomads and tribal peoples elsewhere in the region.

This fourth edition has been extensively revised and rewritten. Even with the addition of Internet citations and resources, the overall structure remains durable. Earlier editions, in addition to being used in courses in anthropology, have been adopted for courses in history, politics, religious studies, urban planning, international relations, and Middle Eastern civilizations in the United States, Australia, Canada, Great Britain, France, Germany, Italy (in translation), Japan (in translation), Russia, and the Middle East. In revising, I have sought to take the diversity of this audience into account, and I have benefited from the comments of many readers.

The Wissenschaftskolleg (Institute for Advanced Study) of Berlin provided the library and work facilities critical to putting this fourth edition into final form, and the Claire Garber Goodman Fund of the Department of Anthropology at Dartmouth College made possible the introduction of World Wide Web media in this edition. I particularly wish to thank Cameron Brown at the Hebrew University of Jerusalem for his assistance in evaluating and locating Web resources appropriate to this book. Numerous colleagues and publishers have generously allowed the use of photographs and other materials, and they are acknowledged at appropriate places in the text.

The colleagues, friends, and reviewers who offered advice and support for the first three editions of this book are not listed here again, but my appreciation remains as strong as ever.

1. The Middle East and Central Asia: An Anthropological Approach

2. Middle East and Central Asia, The: An Anthropological Approach