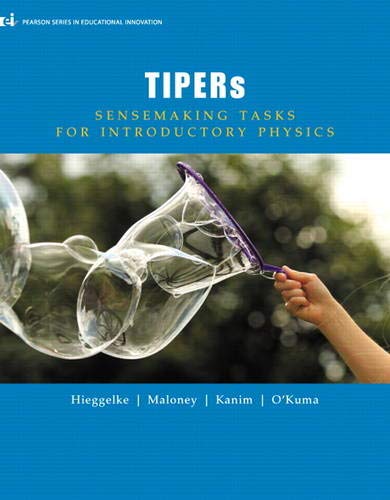 TIPERs: Sensemaking Tasks for Introductory Physics gives introductory physics students the type of practice they need to promote a conceptual understanding of problem solving. This supplementary text helps students to connect the physical rules of the universe with the mathematical tools used to express them.

The exercises in this workbook are intended to promote sensemaking. The various formats of the questions are difficult to solve just by using physics equations as formulas. Students will need to develop a solid qualitative understanding of the concepts, principles, and relationships in physics. In addition, they will have to decide what is relevant and what isn’t, which equations apply and which don’t, and what the equations tell one about physical situations.

The goal is that when students are given a physics problem where they are asked solve for an unknown quantity, they will understand the physics of the problem in addition to finding the answer.

Since 1991, Curtis Hieggelke, David Maloney, Thomas O’Kuma, and Stephen Kanim have led over 35 workshops in which educators learned how to use and develop TIPERs. Many of these workshops were part of the Two-Year College Physics Workshop Project (supported by seven grants from the National Science Foundation and co-directed by Hieggelke and O’Kuma), which has offered a series of more than 60 professional development workshops for over 1,200 participants of two-year college and high school physics teachers. Working with Alan Van Heuvelen and Thomas O’Kuma, Maloney and Hieggelke also developed the Conceptual Survey of Electricity and Magnetism, which has become a standard instrument for measuring electricity and magnetism conceptual gains in introductory physics courses. The American Physical Society gave the 2009 Excellence in Physics Education Award to Hieggelke, Maloney, and O’Kuma, in part for their work on TIPERs. This is the fifth book for Maloney and Hieggelke dealing with curriculum materials based on Physics Education Research (PER).