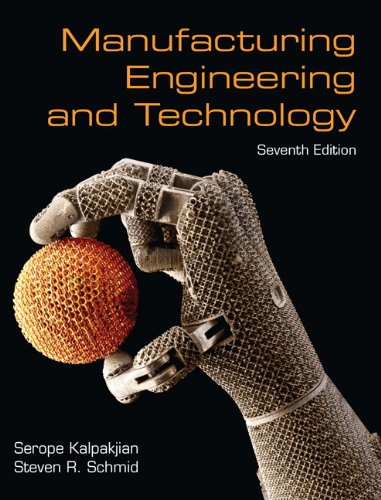 For courses in manufacturing processes at two- or four-year schools. This text also serves as a valuable reference text for professionals.

With a total of 120 examples and case studies, up-to-date and comprehensive coverage of all topics, and superior two-color graphics, this text provides a solid background for manufacturing students and serves as a valuable reference text for professionals.

Serope Kalpakjian is a professor emeritus of mechanical and materials engineering at the Illinois Institute of Technology, Chicago. He is the author of Mechanical Processing of Materials (Van Nostrand, 1967) and co-author of Lubricants and Lubrication in Metalworking Operations (with E.S. Nachtman, Dekker, 1985). Both of the first editions of his books Manufacturing Processes for Engineering Materials (Addison-Wesley, 1984) and Manufacturing Engineering and Technology (Addison-Wesley, 1989) have received the M. Eugene Merchant Manufacturing Textbook Award of SME. He has conducted research in several areas in manufacturing processes; is the author of numerous technical papers and articles in professional journals, handbooks, and encyclopedias; and has edited several conference proceedings. He also has been editor and co-editor of various technical journals and has served on the editorial board of Encyclopedia Americana.

Professor Kalpakjian has received the Forging Industry Educational and Research Foundation Best Paper Award (1966), the Excellence in Teaching Award from the Illinois Institute of Technology (1970), the ASME Centennial Medallion (1980), the SME International Education Award (1989), a Person of the Millennium Award from IIT (1999), and the Albert Easton White Outstanding Teacher Award from ASM International (2000); the SME Outstanding Young Manufacturing Engineer Award for 2002 was named after him. Professor Kalpakjian is a life fellow of ASME, fellow of SME, fellow and life member of ASM International, fellow emeritus of The International Academy for Production Engineering (CIRP), and a past president and founding member of the North American Manufacturing Research Institution/SME. He is a high honors graduate of Robert College (Istanbul), Harvard University, and the Massachusetts Institute of Technology.

Steven R. Schmid is an associate professor in the Department of Aerospace and Mechanical Engineering at the University of Notre Dame, where he teaches and conducts research in the general areas of manufacturing, machine design, and tribology. He received his bachelor’s degree in mechanical engineering from the Illinois Institute of Technology (with Honors) and master’s and Ph.D. degrees, both in mechanical engineering, from Northwestern University. He has received numerous awards, including the John T. Parsons Award from SME (2000), the Newkirk Award from ASME (2000), the Kaneb Center Teaching Award (2000 and 2003), and the Ruth and Joel Spira Award for Excellence in Teaching (2005). He is also the recipient of a National Science Foundation CAREERS Award (1996) and an ALCOA Foundation Award (1994).

Professor Schmid is the author of over 100 technical papers, has co-authored Fundamentals of Machine Elements (McGraw-Hill), Fundamentals of Fluid Film Lubrication (Dekker), Manufacturing Processes for Engineering Materials (Prentice Hall), and has contributed two chapters to the CRC Handbook of Modern Tribology. He is a registered professional engineer, a certified manufacturing engineer of SME, a member of the North American Research Institution, and a fellow of the ASME. In 2012, he was named an ASME Foundation Swanson Fellow and served as Assistant Director for Research Partnerships at the Advanced Manufacturing National Program Office, National Institute for Science and Technology.

Book Description Softcover. Condition: New. Brand new book. This is an international edition textbook with identical content as the US version and is usually paperback bound instead of hardcover. We ship all our orders from CA/IL, USA (depending on your address) and NOT from Asia! Buy with confidence from a 5-star US based seller. Choose expedited shipping for superfast delivery with tracking. Seller Inventory # 886|9780133128741

Book Description Softcover. Condition: New. ***International Edition***Soft cover/Paperback*** Textbook printed in English. ***Brand New***. Most international edition has different ISBN and Cover design. Some book may show sales disclaimer such as "Not for Sale or Restricted in US" on the cover page but it is absolutely legal to use. All textbook arrives within 5-7business days. Please provides valid phone number with your order with easy delivery. Seller Inventory # C9780133128741

Book Description soft cover. Condition: New. International Edition. No supplemental materials. International Editions may have a different cover or ISBN but generally have the exact same content as the US edition, just at a more affordable price. In some cases, end of chapter questions may vary slightly from the US edition. International Editions are typically printed in grayscale, and likely will not have any color throughout the book. New. Books ship from multiple locations depending on availability. All orders are shipped with tracking information. We take pride in our customer service. Please contact us if you have any questions regarding this listing. Seller Inventory # 11113