Items related to The Canterbury Tales 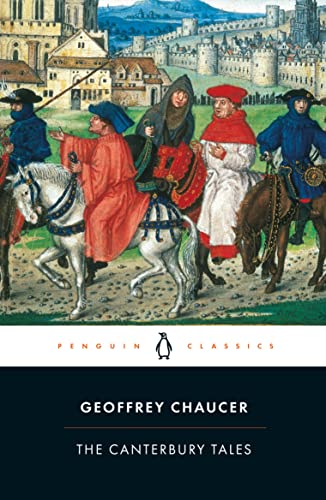 In The Canterbury Tales Chaucer created one of the great touchstones of English literature, a masterly collection of chivalric romances, moral allegories and low farce. A story-telling competition between a group of pilgrims from all walks of life is the occasion for a series of tales that range from the Knight’s account of courtly love and the ebullient Wife of Bath’s Arthurian legend, to the ribald anecdotes of the Miller and the Cook. Rich and diverse, The Canterbury Tales offer us an unrivalled glimpse into the life and mind of medieval England.

For more than sixty-five years, Penguin has been the leading publisher of classic literature in the English-speaking world. With more than 1,500 titles, Penguin Classics represents a global bookshelf of the best works throughout history and across genres and disciplines. Readers trust the series to provide authoritative texts enhanced by introductions and notes by distinguished scholars and contemporary authors, as well as up-to-date translations by award-winning translators.

On a spring day in April--sometime in the waning years of the 14th century--29 travelers set out for Canterbury on a pilgrimage to the shrine of Saint Thomas Beckett. Among them is a knight, a monk, a prioress, a plowman, a miller, a merchant, a clerk, and an oft-widowed wife from Bath. Travel is arduous and wearing; to maintain their spirits, this band of pilgrims entertains each other with a series of tall tales that span the spectrum of literary genres. Five hundred years later, people are still reading Geoffrey Chaucer's Canterbury Tales. If you haven't yet made the acquaintance of the Franklin, the Pardoner, or the Squire because you never learned Middle English, take heart: this edition of the Tales has been translated into modern idiom.

From the heroic romance of "The Knight's Tale" to the low farce embodied in the stories of the Miller, the Reeve, and the Merchant, Chaucer treated such universal subjects as love, sex, and death in poetry that is simultaneously witty, insightful, and poignant. The Canterbury Tales is a grand tour of 14th-century English mores and morals--one that modern-day readers will enjoy.

This textbook series provides concise and lucid introductions to major works of literature, from classical antiquity to the twentieth century. Each book provides close reading of the text, as well as giving a full account of its historical, cultural and intellectual background, a discussion of its influence, and further reading.

Book Description Paperback. Condition: New. Repr. Language: English. Brand new Book. 'Nevill Coghill's easy, seductive translation ensures that this, the most popular work in English Literature - now 600 years old - will run through yet more centuries' Melvyn BraggIn The Canterbury Tales Chaucer created one of the great touchstones of English literature. A storytelling competition within a group of pilgrims from all walks of life is the occasion for a series of tales that range from the Knight's account of courtly love and the ebullient Wife of Bath's Arthurian legend to the ribald anecdotes of the Miller and the Cook. This masterly and vivid modern English verse translation retains all the vigour and poetry of Chaucer's fourteenth-century Middle English.Translated by NEVILL COGHILL. Seller Inventory # AAZ9780140424386

The Canterbury Tales (Paperback or Softback)