Items related to Tales of the Greek Heroes (Puffin Classics) 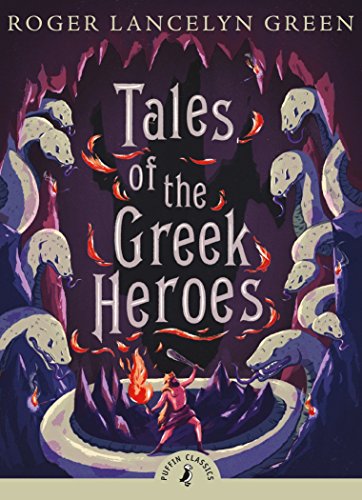 The mysterious and exciting legends of the gods and heroes in Ancient Greece, from the adventures of Perseus, the labours of Heracles, the voyage of Jason and the Argonauts, to Odysseus and the Trojan wars. Introduced with wit and humour by Rick Riordan, creator of the highly successful Percy Jackson series.

About the Author:
Roger Lancelyn Green was born in 1918 and lived in Oxford and at his family home in Cheshire, which the Greens had owned for more than 900 years. He loved storytelling and was fascinated by traditional fairy tales, myths and legends from around the world. He was a professional actor, a librarian and a teacher. His retellings include Egyptian, Greek and Norse legends, plus a retelling of Robin Hood. He also wrote many books for adults, including a biography of his friend C. S. Lewis, creator of the The Chronicles of Narnia. Roger Lancelyn Green died in 1987.
From AudioFile:
While by no means the most scholarly collection of Greek myths and legends, Roger Lancelyn Green's retellings are among the most accessible, particularly to younger listeners, while retaining the poetic quality of the ancient texts. TALES OF THE GREEK HEROES recounts the origins of the Greek pantheon, the adventures of Perseus, the seven labors of Heracles, and the voyage of Jason and the Argonauts. Edward Lewis reads with a clean precision, but some listeners may find his style stiff and pedantic. S.E.S. © AudioFile 2003, Portland, Maine-- Copyright © AudioFile, Portland, Maine

Tales of the Greek Heroes

Tales of the Greek Heroes (Paperback or Softback)

Tales of the Greek Heroes (Paperback)

Book Description Paperback. Condition: New. Language: English. Brand new Book. Puffin Classics: the definitive collection of timeless stories, for every child.Heracles hauling the triple-headed dog Cerberus from the underworld. Jason voyaging across oceans to seize the golden fleece. Odysseus and the Trojan wars. Tales of the Greek Heroes tells the mysterious and exciting legends of the gods and heroes in Ancient Greece. Greek mythology has inspired stories for thousands of years, with tales of lost love and magic. Join our heroes in their journeys of resilience and revenge, guilt and love, and trials and betrayal.This edition includes a special introduction by Rick Riordan, creator of the highly successful Percy Jackson series, inspired by the great Greek myths. Seller Inventory # BTY9780141325286