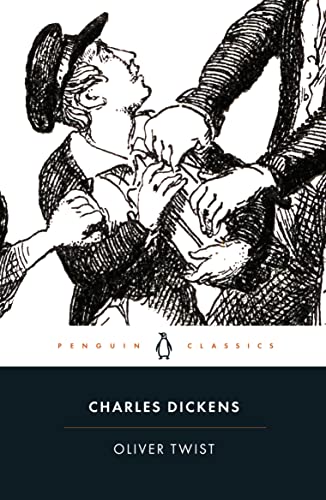 A gripping portrayal of London's dark criminal underbelly, published in Penguin Classics with an introduction by Philip Horne.

The story of Oliver Twist - orphaned, and set upon by evil and adversity from his first breath - shocked readers when it was published. After running away from the workhouse and pompous beadle Mr Bumble, Oliver finds himself lured into a den of thieves peopled by vivid and memorable characters - the Artful Dodger, vicious burglar Bill Sikes, his dog Bull's Eye, and prostitute Nancy, all watched over by cunning master-thief Fagin. Combining elements of Gothic Romance, the Newgate Novel and popular melodrama, Dickens created an entirely new kind of fiction, scathing in its indictment of a cruel society, and pervaded by an unforgettable sense of threat and mystery.

This Penguin Classics edition of Oliver Twist is the first critical edition to faithfully reproduce the text as its earliest readers would have encountered it from its serialisation in Bentley's Miscellany, and includes an introduction by Philip Horne, a glossary of Victorian thieves' slang, a chronology of Dickens's life, a map of contemporary London and all of George Cruikshank's original illustrations.

This fiercely comic tale stands in marked contrast to its genial predecessor, The Pickwick Papers. Set against London's seedy back street slums, Oliver Twist is the saga of a workhouse orphan captured and thrust into a thieves' den, where some of Dickens's most depraved villains preside: the incorrigible Artful Dodger, the murderous bully Sikes, and the terrible Fagin, that treacherous ringleader whose grinning knavery threatens to send them all to the "ghostly gallows." Yet at the heart of this drama is the orphan Oliver, whose unsullied goodness leads him at last to salvation. In 1838 the publication of Oliver Twist firmly established the literary eminence of young Dickens. It was, according to Edgar Johnson, "a clarion peal announcing to the world that in Charles Dickens the rejected and forgotten and misused of the world had a champion."

Charles Dickens’s famous second novel recounts the story of a boy born in the workhouse and raised in an infant farm as he tries to make his way in the world. Intended to raise feeling against the Poor Law Amendment Act of 1834 (which had emphasized the workhouse as an appropriate means of dealing with the problem of poverty), Oliver Twist also provides a sweeping portrait of London life in the 1830s—including the life of the criminal elements in society. Oliver Twist was first published in serialised form (with illustrations by George Cruikshank) in Bentley's Miscellany between February 1837 and April 1839. It was issued with some corrections and revisions in ten numbers in 1846 by Bradbury and Evans (which then also issued the same text in a single volume). Each of these ten numbers, including the Cruikshank illustrations and the advertisements, is included in this facsimile reprint of the 1846 edition. This is one of a series from Broadview Press of facsimile reprint editions—editions that provide readers with a direct sense of these works as the Victorians themselves experienced them.