Items related to The Secret Life of Bees

The Secret Life of Bees 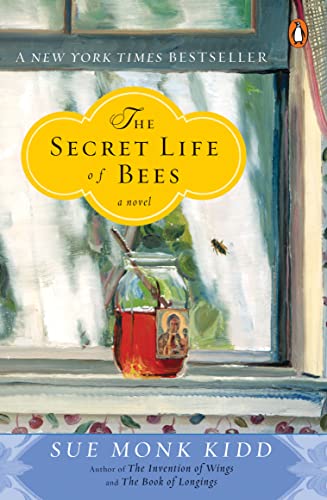 A perfect holiday gift, the multi-million bestselling novel about a young girl's journey towards healing and the transforming power of love, from the award-winning author of The Invention of Wings and the forthcoming novel The Book of Longings

Set in South Carolina in 1964, The Secret Life of Bees tells the story of Lily Owens, whose life has been shaped around the blurred memory of the afternoon her mother was killed. When Lily's fierce-hearted black "stand-in mother," Rosaleen, insults three of the deepest racists in town, Lily decides to spring them both free. They escape to Tiburon, South Carolina--a town that holds the secret to her mother's past. Taken in by an eccentric trio of black beekeeping sister, Lily is introduced to their mesmerizing world of bees and honey, and the Black Madonna. This is a remarkable novel about divine female power, a story that women will share and pass on to their daughters for years to come.

In Sue Monk Kidd's The Secret Life of Bees, 14-year-old Lily Owen, neglected by her father and isolated on their Georgia peach farm, spends hours imagining a blissful infancy when she was loved and nurtured by her mother, Deborah, whom she barely remembers. These consoling fantasies are her heart's answer to the family story that as a child, in unclear circumstances, Lily accidentally shot and killed her mother. All Lily has left of Deborah is a strange image of a Black Madonna, with the words "Tiburon, South Carolina" scrawled on the back. The search for a mother, and the need to mother oneself, are crucial elements in this well-written coming-of-age story set in the early 1960s against a background of racial violence and unrest. When Lily's beloved nanny, Rosaleen, manages to insult a group of angry white men on her way to register to vote and has to skip town, Lily takes the opportunity to go with her, fleeing to the only place she can think of--Tiburon, South Carolina--determined to find out more about her dead mother. Although the plot threads are too neatly trimmed, The Secret Life of Bees is a carefully crafted novel with an inspired depiction of character. The legend of the Black Madonna and the brave, kind, peculiar women who perpetuate Lily's story dominate the second half of the book, placing Kidd's debut novel squarely in the honored tradition of the Southern Gothic. --Regina Marler

"This is the story of a young girl's journey toward healing, and of finding, at its end, not only wholeness, but the intrinsic sacredness of living in the world. I think it is simply wonderful" (Anne Rivers Siddons)

"Sue Monk Kidd's eccentric, inventive, and ultimately forgiving novel is reminscent of the work of Reynolds Price in its ability to create a truly original Southern voice." (Anita Shreve)

"I am amazed that this moving, original, and accomplished book is a first novel. It is wonderfully written, powerful, poignant, and humorous, and takes a line which is -- refreshingly -- strongly female without being cliche-feminist. It is also deliciously eccentric, which lifts it out of the usual category of a rite-of-passage novel into the realms of real distinction. DO read it." (Joanna Trollope)

"What a splendid novel! It's wonderfully thoughtful and sensitive and compulsively readable." (Susan Isaacs)

"The Secret Life of Bees is a novel of love and almost unbelievable courage, the quest of one young girl in search of her mother and so much more. Sue Monk Kidd takes on huge things, and by writing about what is mysterious, even difficult, in life, illuminates what is beautiful. She proves that a family can be found where you least expect it--maybe not under your own roof, but in that magical place where you find love. The Secret Life of Bees is a gift, filled with hope." (Luanne Rice, author of Dream Country)

"Writing with the intimate voice of the memoirist and with the Southerner's abiding sense of place, Sue Monk Kidd has written a forgiving story for the motherless child in all of us." (Shelby Hearon)

"Sue Monk Kidd has written a wonderful novel about mothers and daughters and the transcendent power of love, all the while masterfully illuminating the feminine face of God." (Connie May Fowler)

"With imagination as lush and colorful as the American South, a clutch of deliciously eccentric characters, and vivid prose, Sue Monk Kidd creates a rich, maternal haven in a harsh world." (Christina Schwarz)

"Sue Monk Kidd is an extraordinary storyteller. In "The Secret Life of Bees," she explores a young girl's search for the truth about her mother; her courage to tear down racial barriers; and her joy as she claims her place within a community of women. Beautifully written." (Ursula Hegi, author of The Vision of Emma Blau)

1. The Secret Life of Bees

2. The Secret Life of Bees

3. The Secret Life of Bees

4. The Secret Life of Bees

5. The Secret Life of Bees

6. The Secret Life of Bees

7. The Secret Life Of Bees

8. The Secret Life of Bees (Paperback or Softback)

9. The Secret Life of Bees

10. The Secret Life of Bees