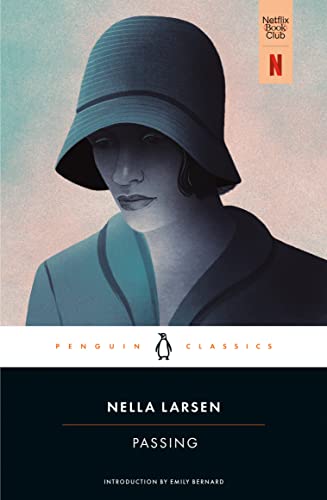 Clare Kendry is living on the edge. Light-skinned, elegant, and ambitious, she is married to a racist white man unaware of her African American heritage, and has severed all ties to her past after deciding to “pass” as a white woman. Clare’s childhood friend, Irene Redfield, just as light-skinned, has chosen to remain within the African American community, and is simultaneously allured and repelled by Clare’s risky decision to engage in racial masquerade for personal and societal gain. After frequenting African American-centric gatherings together in Harlem, Clare’s interest in Irene turns into a homoerotic longing for Irene’s black identity that she abandoned and can never embrace again, and she is forced to grapple with her decision to pass for white in a way that is both tragic and telling. This edition features a new introduction by Emily Bernard and notes by Thadious M. Davis.

The heroine of Passing takes an elevator from the infernal August Chicago streets to the breezy rooftop of the heavenly Drayton Hotel, "wafted upward on a magic carpet to another world, pleasant, quiet, and strangely remote from the sizzling one that she had left below." Irene is black, but like her author, the Danish-African American Nella Larsen (a star of the 1920s to mid-1930s Harlem Renaissance and the first black woman to win a Guggenheim creative-writing award), she can "pass" in white society. Yet one woman in the tea room, "fair and golden, like a sunlit day," keeps staring at her, and eventually introduces herself as Irene's childhood friend Clare, who left their hometown 12 years before when her father died. Clare's father had been born "on the left hand"--he was the product of a legal marriage between a white man and a black woman and therefore cut off from his inheritance. So she was raised penniless by white racist relatives, and now she passes as white. Even Clare's violent white husband is in the dark about her past, though he teases her about her tan and affectionately calls her "Nig." He laughingly explains: "When we were first married, she was white as--as--well as white as a lily. But I declare she's getting darker and darker." As Larsen makes clear, Passing can also mean dying, and Clare is in peril of losing her identity and her life.

The tale is simple on the surface--a few adventures in Chicago and New York's high life, with lots of real people and race-mixing events described (explicated by Thadious M. Davis's helpful introduction and footnotes). But underneath, it seethes with rage, guilt, sex, and complex deceptions. Irene fears losing her black husband to Clare, who seems increasingly predatory. Or is this all in Irene's mind? And is everyone wearing a mask? Larsen's book is a scary hall of mirrors, a murder mystery that can't resolve itself. It sticks with you. --Tim Appelo

First published to critical acclaim in 1929, Passing firmly established Nella Larsen's prominence among women writers of the Harlem Renaissance. The Modern Library is proud to present Passing?an electrifying story of two women who cross the color line in 1920s New York?together with a new Introduction by the Obie Award- winning playwright and novelist Ntozake Shange.

Irene Redfield, the novel's protagonist, is a woman with an enviable life. She and her husband, Brian, a prominent physician, share a comfortable Harlem town house with their sons. Her work arranging charity balls that gather Harlem's elite creates a sense of purpose and respectability for Irene. But her hold on this world begins to slip the day she encounters Clare Kendry, a childhood friend with whom she had lost touch. Clare?light-skinned, beautiful, and charming?tells Irene how, after her father's death, she left behind the black neighborhood of her adolescence and began passing for white, hiding her true identity from everyone, including her racist husband. As Clare begins inserting herself into Irene's life, Irene is thrown into a panic, terrified of the consequences of Clare's dangerous behavior. And when Clare witnesses the vibrancy and energy of the community she left behind, her burning desire to come back threatens to shatter her careful deception.

Brilliantly plotted and elegantly written, Passing offers a gripping psychological portrait of emotional extremity. The New York Times Book Review called Larsen "adroit at tracing the involved processes of a mind divided against itself, that fights between the dictates of reason and desire." The Saturday Review of Literature said, "[Larsen] has produced a work so fine, sensitive, and distinguished that it rises above race categories and becomes that rare object, a good novel."

Book Description Paperback. Condition: New. Language: English. Brand new Book. A classic, brilliant and layered novel that has been at the heart of racial identity discourse in America for almost a century.Clare Kendry leads a dangerous life. Fair, elegant, and ambitious, she is married to a white man unaware of her African American heritage and has severed all ties to her past. Clare's childhood friend, Irene Redfield, just as light-skinned, has chosen to remain within the African American community, but refuses to acknowledge the racism that continues to constrict her family's happiness. A chance encounter forces both women to confront the lies they have told others - and the secret fears they have buried within themselves. Seller Inventory # AAZ9780142437278