Items related to The Shadow of the Wind

Carlos Ruiz Zafón The Shadow of the Wind

The Shadow of the Wind 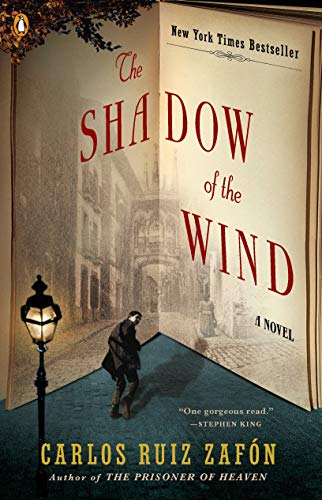 Barcelona, 1945: A city slowly heals in the aftermath of the Spanish Civil War, and Daniel, an antiquarian book dealer’s son who mourns the loss of his mother, finds solace in a mysterious book entitled The Shadow of the Wind, by one Julián Carax. But when he sets out to find the author’s other works, he makes a shocking discovery: someone has been systematically destroying every copy of every book Carax has written. In fact, Daniel may have the last of Carax’s books in existence. Soon Daniel’s seemingly innocent quest opens a door into one of Barcelona’s darkest secrets--an epic story of murder, madness, and doomed love.

"Wonderous... masterful... The Shadow of the Wind is ultimately a love letter to literature, intended for readers as passionate about storytelling as its young hero."—Entertainment Weekly (Editor's Choice)

CARLOS RUIZ ZAFÓN is one of the world’s most read and best-loved writers. His work has been translated into more than forty languages and published around the world, garnering numerous international prizes and reaching millions of readers. He divides his time between Barcelona and Los Angeles. He is the author of The Shadow of the Wind, The Angel's Game, The Prince of Mist, The Midnight Palace, and, most recently, The Prisoner of Heaven.

LUCIA GRAVES is the author and translator of many works and has overseen Spanish-language editions of the poetry of her father, Robert Graves.

A secret's worth depends on the people from whom it must be kept. My first thought on waking was to tell my best friend about the Cemetery of Forgotten Books. Tomás Aguilar was a classmate who devoted his free time and his talent to the invention of wonderfully ingenious contraptions of dubious practicality, like the aerostatic dart or the dynamo spinning top. I pictured us both, equipped with flashlights and compasses, uncovering the mysteries of those bibliographic catacombs. Who better than Tomás to share my secret? Then, remembering my promise, I decided that circumstances advised me to adopt what in detective novels is termed a different modus operandi. At noon I approached my father to quiz him about the book and about Julián Carax-both world famous, I assumed. My plan was to get my hands on his complete works and read them all by the end of the week. To my surprise, I discovered that my father, a natural-born librarian and a walking lexicon of publishers' catalogs and oddities, had never heard of The Shadow of the Wind or Julián Carax. Intrigued, he examined the printing history on the back of the title page for clues.

"It says here that this copy is part of an edition of twenty-five hundred printed in Barcelona by Cabestany Editores, in June 1936."

"Do you know the publishing house?"

"It closed down years ago. But, wait, this is not the original. The first edition came out in November 1935 but was printed in Paris....Published by Galiano & Neuval. Doesn't ring a bell."

"So is this a translation?"

"It doesn't say so. From what I can see, the text must be the original one."

"A book in Spanish, first published in France?"

"It's not that unusual, not in times like these," my father put in. "Perhaps Barceló can help us...."

Gustavo Barceló was an old colleague of my father's who now owned a cavernous establishment on Calle Fernando with a commanding position in the city's secondhand-book trade. Perpetually affixed to his mouth was an unlit pipe that impregnated his person with the aroma of a Persian market. He liked to describe himself as the last romantic, and he was not above claiming that a remote line in his ancestry led directly to Lord Byron himself. As if to prove this connection, Barceló fashioned his wardrobe in the style of a nineteenth-century dandy. His casual attire consisted of a cravat, white patent leather shoes, and a plain glass monocle that, according to malicious gossip, he did not remove even in the intimacy of the lavatory. Flights of fancy aside, the most significant relative in his lineage was his begetter, an industrialist who had become fabulously wealthy by questionable means at the end of the nineteenth century. According to my father, Gustavo Barceló was, technically speaking, loaded, and his palatial bookshop was more of a passion than a business. He loved books unreservedly, and-although he denied this categorically-if someone stepped into his bookshop and fell in love with a tome he could not afford, Barceló would lower its price, or even give it away, if he felt that the buyer was a serious reader and not an accidental browser. Barceló also boasted an elephantine memory allied to a pedantry that matched his demeanor and the sonority of his voice. If anyone knew about odd books, it was he. That afternoon, after closing the shop, my father suggested that we stroll along to the Els Quatre Gats, a café on Calle Montsió, where Barceló and his bibliophile knights of the round table gathered to discuss the finer points of decadent poets, dead languages, and neglected, moth-ridden masterpieces.

Els Quatre Gats was just a five-minute walk from our house and one of my favorite haunts. My parents had met there in 1932, and I attributed my one-way ticket into this world in part to the old café's charms. Stone dragons guarded a lamplit façade anchored in shadows. Inside, voices seemed shaded by the echoes of other times. Accountants, dreamers, and would-be geniuses shared tables with the specters of Pablo Picasso, Isaac Albéniz, Federico García Lorca, and Salvador Dalí. There any poor devil could pass for a historical figure for the price of a small coffee.

"Sempere, old man," proclaimed Barceló when he saw my father come in. "Hail the prodigal son. To what do we owe the honor?"

"You owe the honor to my son, Daniel, Don Gustavo. He's just made a discovery."

"Well, then, pray come and sit down with us, for we must celebrate this ephemeral event," he announced.

"Ephemeral?" I whispered to my father.

"Barceló can express himself only in frilly words," my father whispered back. "Don't say anything, or he'll get carried away."

The lesser members of the coterie made room for us in their circle, and Barceló, who enjoyed flaunting his generosity in public, insisted on treating us.

"How old is the lad?" inquired Barceló, inspecting me out of the corner of his eye.

"In other words, ten. Don't add on any years, you rascal. Life will see to that without your help."

A few of his chums grumbled in assent. Barceló signaled to a waiter of such remarkable decrepitude that he looked as if he should be declared a national landmark.

"A cognac for my friend Sempere, from the good bottle, and a cinnamon milk shake for the young one-he's a growing boy. Ah, and bring us some bits of ham, but spare us the delicacies you brought us earlier, eh? If we fancy rubber, we'll call for Pirelli tires."

The waiter nodded and left, dragging his feet.

"I hate to bring up the subject," Barceló said, "but how can there be jobs? In this country nobody ever retires, not even after they're dead. Just look at El Cid. I tell you, we're a hopeless case."

He sucked on his cold pipe, eyes already scanning the book in my hands. Despite his pretentious façade and his verbosity, Barceló could smell good prey the way a wolf scents blood.

"Let me see," he said, feigning disinterest. "What have we here?"

I glanced at my father. He nodded approvingly. Without further ado, I handed Barceló the book. The bookseller greeted it with expert hands. His pianist's fingers quickly explored its texture, consistency, and condition. He located the page with the publication and printer's notices and studied it with Holmesian flair. The rest watched in silence, as if awaiting a miracle, or permission to breathe again.

"Carax. Interesting," he murmured in an inscrutable tone.

I held out my hand to recover the book. Barceló arched his eyebrows but gave it back with an icy smile.

"Where did you find it, young man?"

"It's a secret," I answered, knowing that my father would be smiling to himself. Barceló frowned and looked at my father. "Sempere, my dearest old friend, because it's you and because of the high esteem I hold you in, and in honor of the long and profound friendship that unites us like brothers, let's call it at forty duros, end of story."

"You'll have to discuss that with my son," my father pointed out. "The book is his."

Barceló granted me a wolfish smile. "What do you say, laddie? Forty duros isn't bad for a first sale....Sempere, this boy of yours will make a name for himself in the business."

The choir cheered his remark. Barceló gave me a triumphant look and pulled out his leather wallet. He ceremoniously counted out two hundred pesetas, which in those days was quite a fortune, and handed them to me. But I just shook my head. Barceló scowled.

"Dear boy, greed is most certainly an ugly, not to say mortal, sin. Be sensible. Call me crazy, but I'll raise that to sixty duros, and you can open a retirement fund. At your age you must start thinking of the future."

I shook my head again. Barceló shot a poisonous look at my father through his monocle.

Barceló sighed and peered at me closely.

"What I want is to know who Julián Carax is and where I can find other books he's written."

Barceló chuckled and pocketed his wallet, reconsidering his adversary.

"Goodness, a scholar. Sempere, what do you feed the boy?"

The bookseller leaned toward me confidentially, and for a second I thought he betrayed a look of respect that had not been there a few moments earlier.

"We'll make a deal," he said. "Tomorrow, Sunday, in the afternoon, drop by the Ateneo library and ask for me. Bring your precious find with you so that I can examine it properly, and I'll tell you what I know about Julián Carax. Quid pro quo."

"Latin, young man. There's no such thing as dead languages, only dormant minds. Paraphrasing, it means that you can't get something for nothing, but since I like you, I'm going to do you a favor."

The man's oratory could kill flies in midair, but I suspected that if I wanted to find out anything about Julián Carax, I'd be well advised to stay on good terms with him. I proffered my most saintly smile in delight at his Latin outpourings.

"Remember, tomorrow, in the Ateneo," pronounced the bookseller. "But bring the book, or there's no deal."

Our conversation slowly merged into the murmuring of the other members of the coffee set. The discussion turned to some documents found in the basement of El Escorial that hinted at the possibility that Don Miguel de Cervantes had in fact been the nom de plume of a large, hairy lady of letters from Toledo. Barceló seemed distracted, not tempted to claim a share in the debate. He remained quiet, observing me from his fake monocle with a masked smile. Or perhaps he was only looking at the book I held in my hands.

1. The Shadow of the Wind

2. The Shadow of the Wind

3. The Shadow of the Wind

4. The Shadow of the Wind

5. The Shadow of the Wind (Paperback or Softback)

6. The Shadow of the Wind

7. The Shadow of the Wind

8. The Shadow of the Wind

9. The Shadow of the Wind