Items related to All the King's Men

All the King's Men 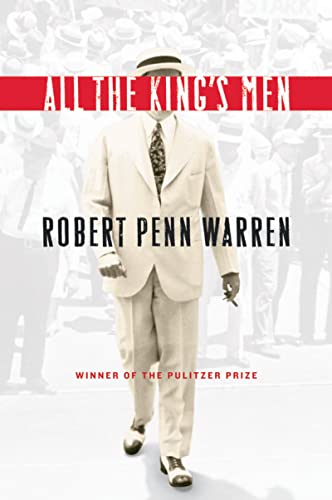 Winner of the Pulitzer Prize, this classic book is generally regarded as the finest novel ever written on American politics. It describes the career of Willie Stark, a back-country lawyer whose idealism is overcome by his lust for power.

This landmark book is a loosely fictionalized account of Governor Huey Long of Louisiana, one of the nation's most astounding politicians. All the King's Men tells the story of Willie Stark, a southern-fried politician who builds support by appealing to the common man and playing dirty politics with the best of the back-room deal-makers. Though Stark quickly sheds his idealism, his right-hand man, Jack Burden -- who narrates the story -- retains it and proves to be a thorn in the new governor's side. Stark becomes a successful leader, but at a very high price, one that eventually costs him his life. The award-winning book is a play of politics, society and personal affairs, all wrapped in the cloak of history.

Set in the '30s, this Pulitzer Prize-winning novel traces the rise and fall of demagogue Willie Stark, a fictional character who resembles the real-life Huey "Kingfish" Long of Louisiana. Stark begins his political career as an idealistic man of the people but soon becomes corrupted by success and caught between dreams of service and an insatiable lust for power. The model for 1996's best-selling novel, Primary Colors, and as relevant today as it was fifty years ago, All the King's Men is one of the classics of American literature.

4. All the King's Men (Paperback or Softback)

8. All the Kings Men

9. All the Kings Men