Items related to Discussion of the Method : Conducting the Engineer's...

Discussion of the Method : Conducting the Engineer's Approach to Problem Solving (Engineering & Technology) 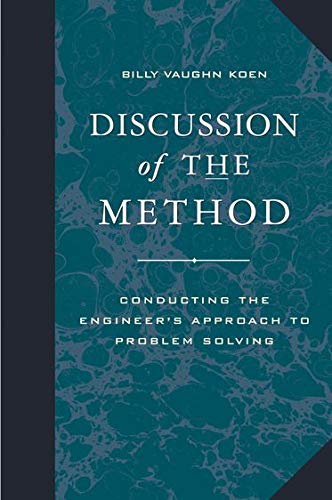 "While the study of the engineering method is important to create the world we would have, its study is equally important to understand the world we do have."
--Billy V. Koen, Introduction, Discussion of the Method

Discussion of the Method outlines the heuristic-based reasoning used by engineers and generalizes it to a universal method for problem-solving. Delving into the connection between engineering and philosophy, this ground-breaking text illustrates how the theoretical and the practical can merge to form real-world solutions. Furthermore, the methodology covered in this innovative book is extremely user-friendly, and easily synthesized with individual approaches to problem-solving. Discussion of the Method is an ideal supplement for introductory and advanced courses in engineering, philosophy, and other disciplines, as well as a compelling read for general audiences.

Billy V. Koen is Professor of Mechanical Engineering at the University of Texas at Austin and a fellow of both the American Nuclear Society (ANS) and the American Society of Engineering Education (ASEE). He has received fifteen awards for teaching excellence, including the W. Leighton Collins Award, (the ASEE's highest honor for pedagogy), and the ASEE Centennial Medallion for his lasting impact on the field of engineering education. He is a pioneer in the application of artificial intelligence to nuclear reactor reliability and the introduction of self-paced teaching strategies in engineering education. He has written more than 125 technical publications and has contributed to numerous textbooks and engineering journals. Included in his body of work is the classic treatise, "Definition of the Engineering Method," published by the ASEE in 1985.

"Koen has both mastered and melded a number of seemingly imiscable disciplines - philosophy, linguistics, theology - with his own professional field of engineering. It is reminiscent of the way that Thomas Aquinas reconciled Christianity with Philosophy." --Michael Murphy, Toronto, Canada
"Professor Koen's book suggests a startling, explicit statement of a new way to think about engineering and life.If we, as educators, wish to prepare our students for engineering practice, the techniques indicated in this book provide a philosophical underpinning for dealing with risks associated with engineering actions and designs, when there is insufficient applicable science."-Dendy Sloan, Chemical Engineering Education, Volume 38, Numer 3, Summer 2004 "Koen illuminates a path to greater understanding. His prose is very engaging and the book is well suited for general audiences. It is one of those book that begs to be read and re-read." --Michael Murphy, Toronto, Canada
"The book touches on so many topics that it is hard to imagine philosophers, mathematicians, linguists, physicists, and scientists of all stripes not having an opinion about it." --Julio M. Otto, Nature
"I found the book to be incredible. I am amazed I didn't even know what engineering is until now." --Howard Duhon, P.E., Chief Process Engineer and Decision Analyst, Gibson Applied Technology and Engineering, LLC
"A profound agglomeration of philosophy, mathematics, eastern mysticism, and very practical engineering." --H. Felix Kloman, GARP