Items related to A Brief History of the Romans

A Brief History of the Romans 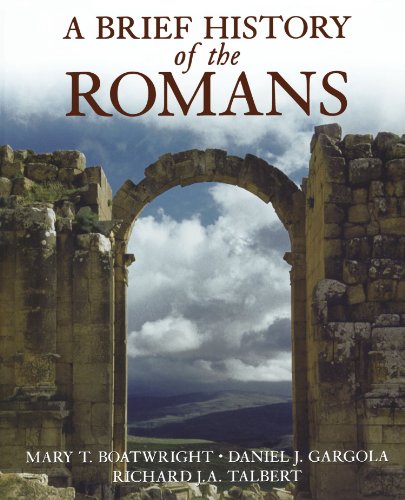 How did a single village community in the Italian peninsula eventually become one of the mightiest imperial powers the world has ever known? This question is the focus of A Brief History of the Romans, an abbreviated version of the highly acclaimed The Romans: From Village to Empire by Mary T. Boatwright, Daniel J. Gargola, and Richard J.A. Talbert.

This shorter version lucidly unfolds Rome's remarkable evolution through monarchy, republic, and then an empire that, at its height, stretched from Scotland to Iraq and the Nile Valley. Concise narrative integrates the political, military, social, and cultural landmarks of over 1,500 years--from the early struggles against Etruscans, Samnites, and Gauls to the sack of Rome by Alaric and his Visigoths. The book gives readers a basic yet engaging introduction to Roman history and society. It is an ideal text for courses on Ancient civilization, Roman civilization, or Roman history.

Daniel J. Gargola is Associate Professor of History at the University of Kentucky, Lexington, and the author of Lands, Laws, and Gods: Magistrates and Ceremony in the Regulation of Public Lands in Republican Rome (1995).

Richard J.A. Talbert is Kenan Professor of History and Classics at the University of North Carolina, Chapel Hill. A past president of the Association of Ancient Historians, he is the author of The Senate of Imperial Rome (1984) and editor of the Barrington Atlas of the Greek and Roman World (2000).

1. A Brief History of the Romans

2. A Brief History of the Romans