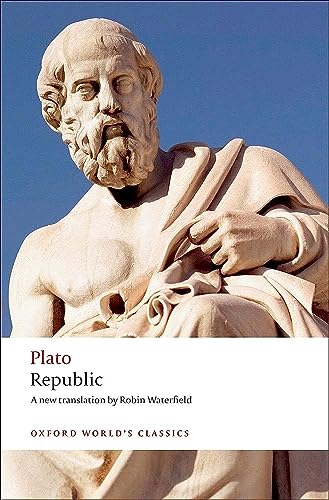 The central work of one of the West's greatest philosophers, The Republic of Plato is a masterpiece of insight and feeling, the finest of the Socratic dialogues, and one of the great books of Western culture. This new translation captures the dramatic realism, poetic beauty, intellectual vitality, and emotional power of Plato at the height of his powers. Deftly weaving three main strands of argument into an artistic whole--the ethical and political, the aesthetic and mystical, and the metaphysical--Plato explores in The Republic the elements of the ideal community, where morality can be achieved in a balance of wisdom, courage, and restraint.

In this influential two-volume edition, first published in 1902, the Scottish classicist James Adam examines the text of Plato's monumental political and philosophical dialogue. Volume 2 focuses on Books 6-10, which discuss the place of the philosopher and questions of governance.

This celebrated philosophical work of the fourth century B.C. contemplates the elements of an ideal state, serving as the forerunner for such other classics of political thought as Cicero's De Republica, St. Augustine's City of God, and Thomas More's Utopia.
Written in the form of a dialog in which Socrates questions his students and fellow citizens, The Republic concerns itself chiefly with the question, "What is justice?" as well as Plato's theory of ideas and his conception of the philosopher's role in society. To explore the latter, he invents the allegory of the cave to illustrate his notion that ordinary men are like prisoners in a cave, observing only the shadows of things, while philosophers are those who venture outside the cave and see things as they really are, and whose task it is to return to the cave and tell the truth about what they have seen. This dynamic metaphor expresses at once the eternal conflict between the world of the senses (the cave) and the world of ideas (the world outside the cave), and the philosopher's role as mediator between the two.

Book Description Oxford University Press, United Kingdom, 2008. Paperback. Condition: New. Language: English. Brand new Book. Republic is the central work of the Western world's most famous philosopher. Essentially an inquiry into morality, Republic also contains crucial arguments and insights into many other areas of philosophy. It is also a literary masterpiece: the philosophy is presented for the most part for the ordinary reader, who is carried along by the wit and intensity of the dialogue and by Plato's unforgettable images of the human condition. This new, lucid translation by Robin Waterfield is complemented by full explanatory notes and an up-to-date critical introduction. ABOUT THE SERIES: For over 100 years Oxford World's Classics has made available the widest range of literature from around the globe. Each affordable volume reflects Oxford's commitment to scholarship, providing the most accurate text plus a wealth of other valuable features, including expert introductions by leading authorities, helpful notes to clarify the text, up-to-date bibliographies for further study, and much more. Seller Inventory # AOP9780199535767