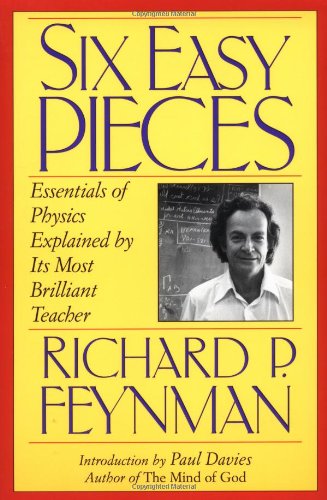 Richard P. Feynman (1918–1988) was widely recognized as the most creative physicist of the post–World War II period. His career was extraordinarily expansive. From his contributions to the development of the atomic bomb a Los Alamos during World War II to his work in quantum electrodynamics, for which he was awarded the Nobel Prize in 1965, Feynman was celebrated for his brilliant and irreverent approach to physics.It was Feynman's outrageous and scintillating method of teaching that earned him legendary status among students and professors of physics. From 1961–1963, Feynman, at the California Institute of Technology, delivered a series of lectures that revolutionized the teaching of physics around the world. Six Easy Pieces, taken from the famous Lectures on Physics, represents the most accessible material from this series. In these six chapters, Feynman introduces the general reader to the following topics: atoms, basic physics, the relationship of physics to other topics, energy, gravitation, and quantum force. With his dazzling and inimitable wit, Feynman presents each discussion without equations or technical jargon.Readers will remember how—using ice water and rubber—Feynman demonstrated with stunning simplicity to a nationally televised audience the physics of the 1986 Challenger disaster. It is precisely this ability—the clear and direct illustration of complex theories—that made Richard Feynman one of the most distinguished educators in the world. Filled with wonderful examples and clever illustrations, Six Easy Pieces is the ideal introduction to the fundamentals of physics by one of the most admired and accessible scientists of our time.

Richard P. Feynman was raised in Far Rockaway, New York, and received his Ph.D. from Princeton. He held professorships at both Cornell and the California Institute of Technology. In 1965 he received the Nobel Prize for his work on quantum electrodynamics. He died in 1988.

This book reprints the six easiest chapters from Feynman's celebrated Lectures on Physics (LJ 12/15/63), which the Nobel Prize-winning scientist delivered from 1961 to 1963 at the California Institute of Technology. Intended for as wide an audience as possible, these chapters are primarily qualitative in nature, with a minimum of formal mathematics. They discuss atoms, basic physics, the relation of physics to other sciences, the conservation of energy, gravitation, and quantum behavior. While this informative work provides a relevant historical perspective on the essentials of physics, the result is somewhat superficial. Nonetheless, because Lectures on Physics is out of print and because the information is still relevant, reprinting these specific chapters was probably a realistic move. The material will be readily understood by scholars, physics students, and informed lay readers. Recommended for academic and public libraries. (Audio tape and CD packages are also available.)-Donald G. Frank, Harvard Univ. Lib., Cambridge, Mass.
Copyright 1994 Reed Business Information, Inc.