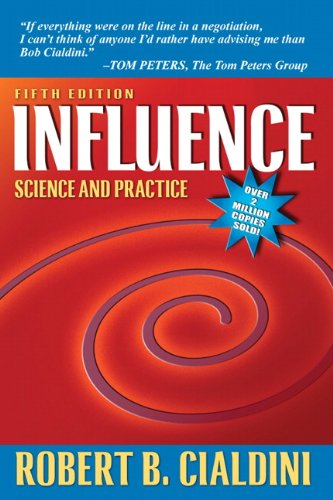 Influence: Science and Practice is an examination of the psychology of compliance (i.e. uncovering which factors cause a person to say “yes” to another's request).

Written in a narrative style combined with scholarly research, Cialdini combines evidence from experimental work with the techniques and strategies he gathered while working as a salesperson, fundraiser, advertiser, and in other positions inside organizations that commonly use compliance tactics to get us to say “yes.” Widely used in classes, as well as sold to people operating successfully in the business world, the eagerly awaited revision of Influence reminds the reader of the power of persuasion.

What factors cause someone to say yes? And which techniques most effectively use these factors to bring about such compliance? In his bestselling book, Robert Cialdini, former salesperson, fundraiser, and advertiser, and current professor of social psychology, examines the science and practice of persuasion and compliance. Praised for its enjoyable writing, practical suggestions, and scientifically documented content, prior editions have been widely read by business professionals, fundraisers, and those interested in psychology. The new edition includes:

·  twice as many first hand accounts of how the book’s principles apply to business and personal lives;

·  updated coverage of popular culture and new technology; and

·  more on how compliance principles work in many cultures.

Here’s what people are saying about INFLUENCE: Science and Practice:

“This marvelous book explains in clear, practical language the ways in which we become persuaded. It offers excellent insights for those who sell, but even more importantly for all of us who negotiate and buy.”

“Bob Cialdini is the most brilliant student of influence and negotiation I’ve encountered. If everything were on the line in a negotiation, I can’t think of anyone I’d rather have advising me.”

“This book is the de facto standard to learn the psychology of persuasion. If you don’t read it, I hope you enjoy pounding your head against the wall and throwing away marketing dollars.”

“His book should be in every sales and marketing person’s briefcase and reread frequently.”

Robert B. Cialdini is a well known and influential speaker who gives frequent speeches on The Power of Ethical Influence to such organizations as IBM, the Mayo Clinic, and NATO. He is currently Regents’ Professor of Psychology at Arizona State University, where he has also been named Graduate Distinguished Research Professor. He is past president of the Society of Personality and Social Psychology. He attributes his longstanding interest in the intricacies of social influence to the fact that he was raised in an entirely Italian family, in a predominantly Polish neighborhood, in a historically German city (Milwaukee), in an otherwise rural state.

Robert B. Cialdini is Regents’ Professor of Psychology and Marketing at Arizona State University, where he has also been named W. P. Carey Distinguished Professor of Marketing.  He has taught at Stanford University and Harvard’s Kennedy School of Government.  He has been elected president of the Society of Personality and Social Psychology.  He is the recipient of the Distinguished Scientific Achievement Award of the Society for Consumer Psychology, the Donald T. Campbell Award for Distinguished Contributions to Social Psychology, and the (inaugural) Peitho Award for Distinguished Contributions to the Science of Social Influence.

Dr. Cialdini attributes his interest in social influences to the fact that he was raised in an entirely Italian family, in a predominantly Polish neighborhood, in a historically German city (Milwaukee), in an otherwise rural state.

Book Description Soft cover. Condition: New. 5e fifth; my offer is for my book which is still in original shrink wrap! I ship now and I ship anywhere you wish; Seller Inventory # 003263