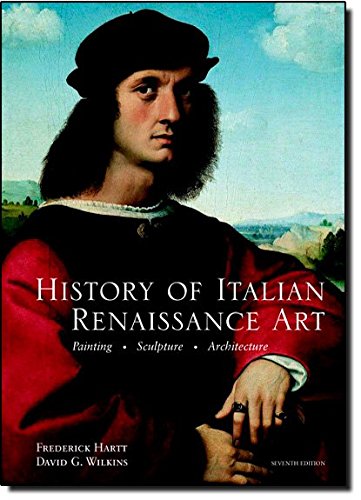 A broad survey of art and architecture in Italy between c. 1250 and 1600, this book approaches the works from the point of view of the artist as individual creator and as an expression of the city within which the artist was working.

History of Italian Renaissance Art, Seventh Edition, brings you an updated understanding of this pivotal period as it incorporates new research and current art historical thinking, while also maintaining the integrity of the story that Frederick Hartt first told so enthusiastically many years ago. Choosing to retain Frederick Hartt's traditional framework, David Wilkins' incisive revisions keep the book fresh and up-to-date.

Long hailed as one of the most comprehensive and richly detailed chronologies of painting, sculpture, and architecture in Italy from c. 1200 A.D. to c. 1594 A. D., this volume focuses on the works of art, their creators, and the circumstances affecting their creation.

The late Frederick Hartt was one of the most distinguished art historians of the twentieth century. A student of Berenson, Schapiro, and Friedlaender, he taught for more than fifty years, influencing generations of Renaissance scholars. At the time of his death he was Paul Goodloe McIntire Professor Emeritus of the History of Art at the University of Virginia. He was a Knight of the Crown of Italy, a Knight Officer of the Order of Merit of the Italian Republic, an honorary citizen of Florence, and an honorary member of the Academy of the Arts of Design, Florence, a society whose charter members included Michelangelo and the Grand Duke Cosimo I de' Medici.

David G . Wilkins is professor emeritus of the history of art and architecture at the University of Pittsburgh and former chair of the department. He has also served on the faculties of the University of Michigan in Florence and the Semester at Sea Program. He is author of Donatello (1984, with Bonnie A. Bennett); Maso di Banco: A Florentine Artist of the Early Trecento (1985); The Illustrated Bartsch: "Pre-Rembrandt Etchers," vol. 53 (1985, with Kahren Arbitman); A History o f the Duquesne Club (1989, with Mark Brown and Lu Donnelly); Art Past/Art Present, a broad survey of the history of art (fifth edition, 2005, with Bernard Schultz and Katheryn M. Linduff); and The Art of the Duquesne Club (2001). He was the revising author for the fourth and fifth editions of History of Italian Renaissance Art: Painting, Sculpture, and Architecture (1994, 2003) and co-editor of The Search for a Patron in the Middle Ages and the Renaissance (1996, with Rebecca L. Wilkins) and Beyond Isabella: Secular Women Patrons of Art in Renaissance Italy (2001 with Sheryl E. Reiss). He was editor of The Collins Big Book of Art (2005).  In 2005 he also received the College Art Association’s national award for Distinguished Teaching in Art History.