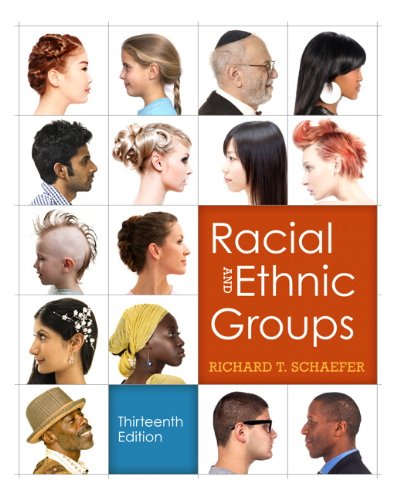 Understand the Changing Dynamics of the U.S. Population

The 13th edition of Schaefer's Racial and Ethnic Groups places current and ethnic relations in a socio-historical context to help readers understand the past and shape the future.

This best-selling Race & Ethnic Relations text is grounded in a socio-historical perspective with engaging stories and first person accounts. Race and Ethnic Groups helps students understand the changing dynamics of the U.S. population by examining our history, exploring our current situation, and discussing concerns for the future.

This text provides an accessible, comprehensive, and up-to-date introduction to the present issues that confront racial and ethnic groups in the U.S. and around the world. It incorporates the most current statistics and data in the marketplace including the most recent census.

Note: MySocLab does not come automatically packaged with this text. To purchase MySocLab, please visit: www.mysoclab.com or you can purchase a valuepack of the text + MySocLab (at no additional cost). ValuePack ISBN-10: 0205248152 / ValuePack ISBN-13: 9780205248155

Richard T. Schaefer grew up in Chicago at a time when neighborhoods were going through transitions in ethnic and racial composition. He found himself increasingly intrigued by what was happening, how people were reacting, and how these changes were affecting neighborhoods and people’s jobs. In high school, he took a course in sociology. His interest in social issues caused him to gravitate to more sociology courses at Northwestern University, where he eventually received a B.A. in sociology. This interest led him to obtain his M.A. and Ph.D. in sociology from the University of Chicago. Dr. Schaefer’s continuing interest in race relations led him to write his master’s thesis on the membership of the Ku Klux Klan and his doctoral thesis on racial prejudice and race relations in Great Britain.

He has taught sociology and courses on multiculturalism for 30 years. He has been invited to give special presentations to students and faculty on racial and ethnic diversity in Illinois, Indiana, Missouri, North Carolina, Ohio, and Texas.

Schaefer is the general editor of the three-volume Encyclopedia of Race, Ethnicity, and Society (2008). He is also the author of introductory sociology books with McGraw-Hill. Schaefer coauthored with William Zellner the ninth edition of Extraordinary Groups (2011). He served as president of the Midwest Sociological Society from 1994 to 1995. In recognition of his achievements in undergraduate teaching, he was named Vincent de Paul Professor of Sociology in 2004.

Thank you to the following reviewers:

“The text has a strong introduction to the study of race and ethnicity that would be valuable in any course. Part 1 does an impressive job of laying out the key terms and ideas with which every student should develop a familiarity.”

“[This text has:] 1. great coverage of the groups; 2. good use of facts and stats; 3. good coverage of group-specific contemporary issues.”

“Great overview of all the important groups, areas, and issues.”

“All the tables, figures, and boxed features are informative, easy to understand and useful. I will often reference these in a lecture and draw student's attention to a specific feature to make a point.”

“This is a very thorough analytical text on minority groups in the US, supplemented with cases, global perspective and research focus. The text covers major topics and themes pertinent to diversity issues.”