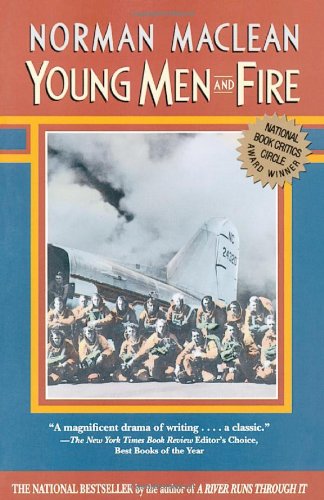 On August 5, 1949, a crew of fifteen of the United States Forest Service's elite airborne firefighters, the Smokejumpers, stepped into the sky above a remote forest fire in the Montana wilderness. Two hours after their jump, all but three of these men were dead or mortally burned. Haunted by these deaths for forty years, Norman Maclean puts back together the scattered pieces of the Mann Gulch tragedy.

"A magnificent drama of writing, a tragedy that pays tribute to the dead and offers rescue to the living.... Maclean's search for the truth, which becomes an exploration of his own mortality, is more compelling even than his journey into the heart of the fire. His description of the conflagration terrifies, but it is his battle with words, his effort to turn the story of the 13 men into tragedy that makes this book a classic."—from New York Times Book Review Editor's Choice, Best Books of 1992

"A treasure: part detective story, part western, part tragedy, part elegy and wholly eloquent ghost story in which the dead and the living join ranks cheerfully, if sometimes eerily, in a search for truth and the rest it brings."—Joseph Coates, Chicago Tribune

"An astonishing book. In compelling language, both homely and elegant, Young Men and Fire miraculously combines a fascinating primer on fires and firefighting, a powerful, breathtakingly real reconstruction of a tragedy, and a meditation on writing, grief and human character.... Maclean's last book will stir your heart and haunt your memory."—Timothy Foote, USA Today

"Beautiful.... A dark American idyll of which the language can be proud."—Robert M. Adams, The New York Review of Books

"Young Men and Fire is a somber and poetic retelling of a tragic event. It is the pinnacle of smokejumping literature and a classic work of 20th-century nonfiction."—John Holkeboer, The Wall Street Journal

"Maclean is always with the brave young dead. . . . They could not have found a storyteller with a better claim to represent their honor. . . . A great book."—James R. Kincaid, New York Times Book Review

On August 5, 1949, lightning came crashing down in the vast spruce forest above Seeley Lake, Montana, and touched off a roaring blaze. As every Westerner knows, lightning means fire, but the fire that raged through Mann Gulch that day was huge--the sort that occurs only every few decades. A battery of paratrooper-firefighters, many of them fresh veterans of World War II, had been anticipating it, and even looking forward to the chance to fight a great fire. Before the day ended thirteen of those smokejumpers lay dead, their charred remains evidence that something had gone terribly wrong. Norman Maclean gives a thorough account of the incident in language not meant for the squeamish: "Burning to death on a mountainside is dying at least three times ... first, considerably ahead of the fire, you reach the verge of death in your boots and your legs; next, as you fail, you sink back in the region of strange gases and red and blue darts where there is no oxygen and here you die in your lungs; then you sink in prayer into the main fire that consumes." After August 1949, he notes, the Forest Service came to recognize that not all fires need to be fought and that fire benefits most forest ecosystems.

On August 5, 1949, a crew of fifteen Smokejumpers, the United States Forest Service's elite airborne firefighters, stepped into the sky above a remote forest fire in the Montana wilderness. Less than two hours after their jump, all but three of these men were dead or fatally burned. Exactly what happened in Mann Gulch that day has been obscured by years of grief and controversy. Now a master storyteller finally gives the Mann Gulch fire its due as tragedy. Norman Maclean first saw the Mann Gulch fire as it still burned in mid-August 1949, and even then he knew he would one day become a part of its story. Maclean spent the last fourteen years of his life studying and reliving the fire. Young Men and Fire is the long-awaited result, a story of Montana, of the ways of wildfires, firefighters, and fire scientists, and especially of a crew, young and proud, who "hadn't learned to count the odds and to sense they might owe the universe a tragedy". This tale is also Maclean's own, the story of a writer obsessed by a strange and human horror, unable to let the truth die with these young men, searching for the last - and lasting - word. Nature's violence collides with human fallibility in Young Men and Fire. The Smokejumpers in Mann Gulch are trapped by a "blowup", a deadly explosion of flame and wind rarely encountered and little understood at the time. Only seconds ahead of the approaching firestorm, the foreman, R. Wagner Dodge, throws himself into the ashes of an "escape fire" - and survives as his confused men run, their last moments obscured by smoke. The parents of the dead cry murder, charging that the foreman's fire killed their boys. Years later, Maclean returns to the scene with twoof the survivors and pursues the mysteries that Mann Gulch has kept hidden since 1949. From the words of witnesses, the evidence of history, and the research of fire scientists, Maclean at last assembles the scattered pieces of the Mann Gulch tragedy.