Items related to On Beauty 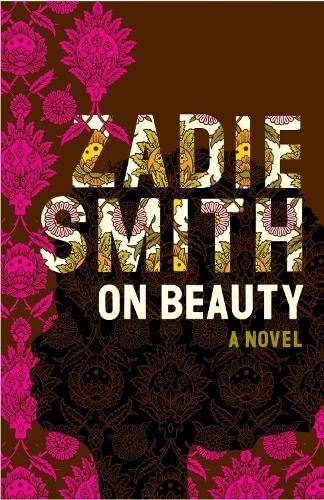 In an author's note at the end of On Beauty, Zadie Smith writes: "My largest structural debt should be obvious to any E.M. Forster fan; suffice it to say he gave me a classy old frame, which I covered with new material as best I could." If it is true that imitation is the sincerest form of flattery, Forster, perched on a cloud somewhere, should be all puffed up with pride. His disciple has taken Howards End, that marvelous tale of class difference, and upped the ante by adding race, politics, and gender. The end result is a story for the 21st century, told with a perfect ear for everything: gangsta street talk; academic posturing, both British and American; down-home black Floridian straight talk; and sassy, profane kids, both black and white.

Howard Belsey is a middle-class white liberal Englishman teaching abroad at Wellington, a thinly disguised version of one of the Ivies. He is a Rembrandt scholar who can't finish his book and a recent adulterer whose marriage is now on the slippery slope to disaster. His wife, Kiki, a black Floridian, is a warm, generous, competent wife, mother, and medical worker. Their children are Jerome, disgusted by his father's behavior, Zora, Wellington sophomore firebrand feminist and Levi, eager to be taken for a "homey," complete with baggy pants, hoodies and the ever-present iPod. This family has no secrets--at least not for long. They talk about everything, appropriate to the occasion or not. And, there is plenty to talk about.

The other half of the story is that of the Kipps family: Monty, stiff, wealthy ultra-conservative vocal Christian and Rembrandt scholar, whose book has been published. His wife Carlene is always slightly out of focus, and that's the way she wants it. She wafts over all proceedings, never really connecting with anyone. That seems to be endemic in the Kipps household. Son Michael is a bit of a Monty clone and daughter Victoria is not at all what Daddy thinks she is. Indeed, Forster's advice, "Only connect," is lost on this group.

The two academics have long been rivals, detesting each other's politics and disagreeing about Rembrandt. They are thrown into further conflict when Jerome leaves Wellington to get away from the discovery of his father's affair, lands on the Kipps' doorstep, falls for Victoria and mistakes what he has going with her for love. Howard makes it worse by trying to fix it. Then, Kipps is granted a visiting professorship at Wellington and the whole family arrives in Massachusetts.

From this raw material, Smith has fashioned a superb book, her best to date. She has interwoven class, race, and gender and taken everyone prisoner. Her even-handed renditions of liberal and/or conservative mouthings are insightful, often hilarious, and damning to all. She has a great time exposing everyone's clay feet. This author is a young woman cynical beyond her years, and we are all richer for it. --Valerie Ryan

Praise for On Beauty:

"A thoroughly original tale . . . wonderfully engaging, wonderfully observed . . . That rare thing: a novel that is as affecting as it is entertaining, as provocative as it is humane."
—Michiko Kakutani, The New York Times

"A thing of beauty. Oh happy day when a writer as gifted as Zadie Smith fulfills her early promise with a novel as accomplished, substantive and penetrating as On Beauty."
—Los Angeles Times

"Smith’s specialty is her ability to render the new world, in its vibrant multiculturalism, with a kind of dancing, daring joy. . . . Her plots and people sing with life. . . . One of the best of the year, a splendid treat. "
—Chicago Tribune

"Short-listed for [the 2005] Man Booker Prize, On Beauty is a rollicking satire . . . a tremendously good read."
—San Francisco Chronicle