Items related to How to Be Both

Smith, Ali How to Be Both

How to Be Both 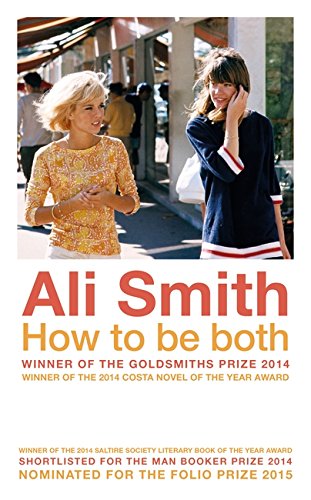 1st UK ed. Shortlisted for the 2014 Man Booker prize. Signed on title page by the author. Includes a fine dust jacket in a Mylar cover

Ali Smith is the author of many works of fiction, including the novel Hotel World, which was short-listed for both the Orange Prize and the Booker Prize and won the Encore Award and the Scottish Arts Council Book of the Year Award, and The Accidental, which won the Whitbread Award and was short-listed for the Man Booker Prize and the Orange Prize. Born in Inverness, Scotland, Smith lives in Cambridge, England.

Consider this moral conundrum for a moment, George’s mother says to George who’s sitting in the front passenger seat.

The passenger seat in the hire car is strange, being on the side the driver’s seat is on at home. This must be a bit like driving is, except without the actual, you know, driving.

Am I? George says. Since when? And is that a moral conundrum?

Ha ha, her mother says. Humour me. Imagine it. You’re an artist.

This conversation is happening last May, when George’s mother is still alive, obviously. She’s been dead since September. Now it’s January, to be more precise it’s just past midnight on New Year’s Eve, which means it has just become the year after the year in which George’s mother died.

George’s father is out. It is better than him being at home, standing maudlin in the kitchen or going round the house switching things off and on. Henry is asleep. She just went in and checked on him; he was dead to the world, though not as dead as the word dead literally means when it means, you know, dead.

This will be the first year her mother hasn’t been alive since the year her mother was born. That is so obvious that it is stupid even to think it and yet so terrible that you can’t not think it. Both at once.

Do you remember when
Things were really hummin’.

Hummin’ doesn’t rhyme with summer, the line doesn’t end in a question mark, and is it meant to mean, literally, do you remember that time when things smelt really bad?

Then Let’s twist again, twisting time is here. Or, as all the sites say, twistin’ time.

At least they’ve used an apostrophe, the George from before her mother died says.

I do not give a fuck about whether some site on the internet attends to grammatical correctness, the George from after says.

That before and after thing is about mourning, is what people keep saying. They keep talking about how grief has stages. There’s some dispute about how many stages of grief there are. There are three, or five, or some people say seven.

It’s quite like the songwriter actually couldn’t be bothered to think of words. Maybe he was in one of the three, five or seven stages of mourning too. Stage nine (or twenty three or a hundred and twenty three or ad infinitum, because nothing will ever not be like this again): in this stage you will no longer be bothered with whether songwords mean anything. In fact you will hate almost all songs.

But George has to find a song to which you can do this specific dance.

It being so apparently contradictory and meaningless is no doubt a bonus. It will be precisely why the song sold so many copies and was such a big deal at the time. People like things not to be too meaningful.

Okay, I’m imagining, George in the passenger seat last May in Italy says at exactly the same time as George at home in England the following January stares at the meaninglessness of the words of an old song. Outside the car window Italy unfurls round and over them so hot and yellow it looks like it’s been sandblasted. In the back Henry snuffles lightly, his eyes closed, his mouth open. The band of the seatbelt is over his forehead because he is so small.

You’re an artist, her mother says, and you’re working on a project with a lot of other artists. And everybody on the project is getting the same amount, salary-wise. But you believe that what you’re doing is worth more than everyone on the project, including you, is getting paid. So you write a letter to the man who’s commissioned the work and you ask him to give you more money than everyone else is getting.

Am I worth more? George says. Am I better than the other artists?

Does that matter? her mother says. Is that what matters?

Is it me or is it the work that’s worth more? George says.

Is this real? George says. Is it hypothetical?

Does that matter? her mother says.

5. How to be both: MINT SIGNED, LINED & PUBLICATION DAY DATED FIRST EDITION

Book Description Hamish Hamilton, London, United Kingdom, 2014. Hardcover. Condition: New. Dust Jacket Condition: New. 1st Edition. First UK Edition's ,First Printing's . These are true first edition's, First printing's (First impression's) with [001] as called for to the copyright pages. Published as two variant editions with the same narrative but with parts one and two switched The two versions are headed by either an eye icon or a CCTV camera icon. Both copies are Signed by Ali Smith to the title page. Slight indentation to the front board of the CCTV camera icon copy else new. May qualify for extra postage. Signed by Author(s). Seller Inventory # 006150