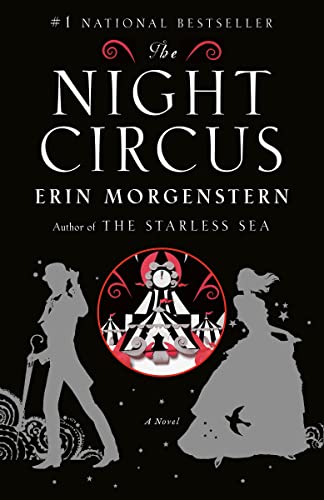 NEW YORK TIMES BESTSELLER
Two starcrossed magicians engage in a deadly game of cunning in The Night Circus, the spellbinding bestseller that has captured the world's imagination.

The circus arrives without warning. No announcements precede it. It is simply there, when yesterday it was not. Within the black-and-white striped canvas tents is an utterly unique experience full of breathtaking amazements. It is called Le Cirque des Ręves, and it is only open at night.

But behind the scenes, a fierce competition is underway: a duel between two young magicians, Celia and Marco, who have been trained since childhood expressly for this purpose by their mercurial instructors. Unbeknownst to them both, this is a game in which only one can be left standing. Despite the high stakes, Celia and Marco soon tumble headfirst into love, setting off a domino effect of dangerous consequences, and leaving the lives of everyone, from the performers to the patrons, hanging in the balance.

Q. This is a lovely and unique story. Why a circus? How did this story first come to you—through a character, a plotline, an emotion?

A. The story came as a location created out of desperation. I was working on a different story altogether, one that was becoming progressively more and more boring because nothing was happening. I needed something exciting to happen and I couldn't figure out how to do it with the locations I had so I sent the characters to the circus. That circus was immediately much more interesting and eventually I abandoned that other story and its characters entirely and focused on the circus instead. What eventually became The Night Circus started from exploring that spontaneously-created location, figuring out who created it and who performed in it and what its story was.

Q. What was your inspiration for some of the amazing acts in this circus?

A. Some of them were traditional circus acts or attractions made a bit more unique, like the acrobats performing directly overhead or the carousel that doesn't simply go in circles. The Cloud Maze is a play on a climbing maze I hazily recall from childhood visits to the Boston Children's Museum. Other tents were created based on color, or lack thereof. I had a lot of dark tents and wanted something lighter and white, the Ice Garden developed from that relatively simple starting point.

Q. Do you have a favorite character?

A. It's impossible to pick a true favorite, though Poppet & Widget are very dear to my heart as they're the first of the characters to turn up in my imagination. They're also just plain fun, both individually and as a pair.

Q. What was the most challenging aspect of developing this story?

A. It didn't have a plot for a very long time. Really, my biggest challenge was finding the actual story within all the atmosphere. I had the place and the characters and the feel of the book long before it had a proper story structure to tie everything together. The novel went through a great many revisions before it figured out what it wanted to be, I tried things that didn't work and then things that sort of worked and replaced old ideas with new ones until I got it right.

Q. Is there an emotion that you had to spend a lot of time with that made you uncomfortable?

A. I'm an emotional sort of person in general and I have a vivid imagination, so I feel the whole spectrum of emotion strongly when I write. It's something I'm used to, though, so nothing in particular made me uncomfortable. There is a lot of frustration felt by various characters, which is not the nicest emotion to be spending a lot of time with, but it helps to drive characters to actions which bring different emotions along.

Q. Tell me about your writing life. Do you have any rituals?

A. I binge write. I think it's because I started seriously writing by participating in National Novel Writing Month, an online-based challenge to write 50,000 words in 30 days. I don't have as tight a time limit anymore but I still write in long marathon sessions and then I won't write for a while, I'm not a write-every-day writer. I go back and forth between input phases where I'm reading a lot or trying to get out and explore the world a bit and soak up inspirations and then I'll get back into output mode and write and write and write.

I don't have any particular rituals, I sometimes like to write in longhand when I'm searching for ideas but I do the vast majority by typing, I can't always keep up with my thoughts longhand. I'm not a coffeeshop writer because I feel obliged to order more coffee and then I end up over-caffeinated.

Q. What's the one true thing you learned from your characters in this novel?

A. I think it's something that I knew already but explored more with these characters, that nothing is as simple as black or white, good or evil. There are all those shades of grey and everyone acts from a place that they see as right and true. (Though they are allowed to change their minds.)

ERIN MORGENSTERN is a writer and multimedia artist who describes all her work as being “fairy tales in one way or another.” She lives in Massachusetts.

Book Description Paperback. Condition: New. 1st. Excellent condition. Interior is tight, bright and clean; no underlining, notes or highlighting. Binding is smooth and solid. Paperback cover is clean and sticker free. Minor scuffing and/or corner bumps on the paperback covers due to shelf wear. 100% Satisfaction Guaranteed. All items are carefully enclosed with bubble wrap. We ship promptly and worldwide via US Post and will email you a tracking number. Seller Inventory # SKU0064948

The Night Circus (Paperback or Softback)