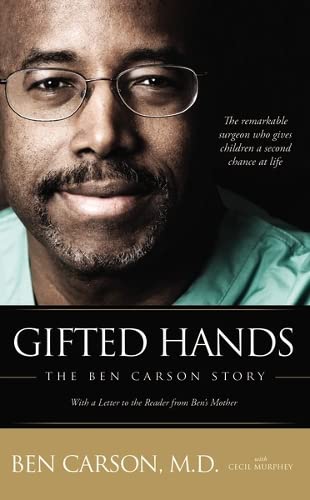 Ben Carson, M.D., works medical miracles. Today, he's one of the most celebrated neurosurgeons in the world. In Gifted Hands, he tells of his inspiring odyssey from his childhood in inner-city Detroit to his position as director of pediatric neurosurgery at Johns Hopkins Hospital at age 33. Ben Carson is a role model for anyone who attempts the seemingly impossible as he takes you into the operating room where he has saved countless lives. Filled with fascinating case histories, this is the dramatic and intimate story of Ben Carson's struggle to beat the odds -- and of the faith and genius that make him one of the greatest life-givers of the century.

In 1987, Dr. Benjamin Carson gained worldwide recognition for his part in the first successful separation of Siamese twins joined at the back of the head. The extremely complex and delicate operation, five months in the planning and twenty-two hours in the execution, involved a surgical plan that Carson helped initiate.

Carson pioneered again in a rare procedure known as hemispherectomy, giving children without hope a second chance at life through a daring operation in which he literally removed one half of their brain.

But such breakthroughs aren't unusual for Ben Carson. He's been beating the odds since he was a child.

Raised in inner-city Detroit by a mother with a third grade education, Ben lacked motivation. He had terrible grades. And a pathological temper threatened to put him in jail. But Sonya Carson convinced her son that he could make something of his life, even though everything around him said otherwise.

Trust in God, a relentless belief in his own capabilities, and sheer determination catapulted Ben from failing grades to the top of his class--and beyond to a Yale scholarship . . . the University of Michigan Medical School . . . and finally, at age 33, the directorship of pediatric neurosurgery at Johns Hopkins Hospital in Baltimore, Maryland. Today, Dr. Ben Carson holds twenty honorary doctorates and is the possessor of a long string of honors and awards, including the Horatio Alger Award, induction into the "Great Blacks in Wax" Museum in Baltimore, Maryland, and an invitation as Keynote Speaker at the 1997 President's National Prayer Breakfast.

Gifted Hands is the riveting story of one man's secret for success, tested against daunting odds and driven by an incredible mindset that dares to take risks. This inspiring autobiography takes you into the operating room to witness surgeries that made headlines around the world--and into the private mind of a compassionate, God-fearing physician who lives to help others. Through it all shines a humility, quick wit, and down-to-earth style that make this book one you won't easily forget. Dr. Benjamin Carson is director of pediatric neurosurgery at Johns Hopkins Hospital in Baltimore. He lives with his wife, Candy, and three sons in West Friendship, Maryland.

Cecil Murphy, author of over forty books, has also assisted well-known personalities in writing their biographies