Items related to Streams in the Desert: 366 Daily Devotional Readings 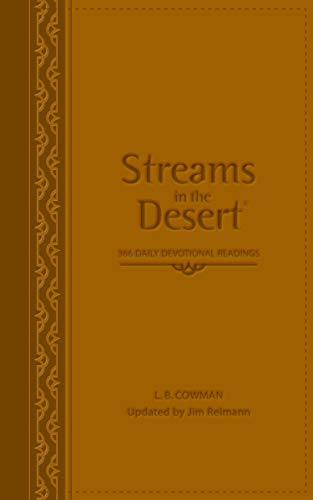 Streams in the Desert® is a powerful collection of meditations, Christian writings, and Scripture, and remains one of the most beloved devotionals of all time. This updated edition, however, offers even more, including Scripture, Subject, and Contributors Indexes. Author L. B. Cowman thoughtfully and prayerfully chose the Scripture and penned or selected the meditations she knew would provide a river of wisdom, encouragement, and inspiration to weary desert travelers. Those words are still clearly relevant in today’s world, where people thirst more than ever for reassurance and guidance. In this updated edition, however, editor Jim Reimann lovingly combines contemporary wording and precise NIV text to help introduce a whole new generation of believers to the timeless messages of God’s faithfulness. Easy-to-read yet true to the essence of the original, this Streams in the Desert offers a refreshing daily dip into God’s purpose, plan, and enduring promise. And now this classic content takes on a classic look. The deluxe edition is bound in stunning Italian Duo-Tone™—the perfect accent for the beautiful and ageless messages of hope found inside.

The late Mrs. Charles E. Cowman wrote the beloved, classic devotional Streams in the Desert. She served with her husband in Japan as a missionary until his illness forced the couple to return to the United States

L. B. Cowman worked as a pioneer missionary with her husband in Japan and China from 1901 to 1917, during which time they helped found the Oriental Missionary Society. When Mr. Cowman's poor health forced the couple to return to the United States, Mrs. Cowman turned her attention to caring for her husband until his death six years later. Out of Mrs. Cowman's experiences and heartbreak came her first book, Streams in the Desert, followed by its companion Springs in the Valley. During the next twenty-five years, Mrs. Cowman inspired several nationwide Scripture distribution campaigns and wrote seven more books. Finally, on Easter Sunday in 1960, at the age of ninety, Mrs. Cowman met face-to-face the God she had served so faithfully for nearly a century.

Jim Reimann has more than five million books in print in twelve languages, including the updated editions of Streams in the Desert and My Utmost for His Highest. He was a former retail executive and past chairman of the Christian Booksellers Association. As an ordained minister, Bible teacher, author, and expert on Israel, he hosted teaching tours of Israel and other Bible lands, which he offered through his website. www.JimReimann.com

Streams in the Desert

Shipping: US$ 4.57
From United Kingdom to U.S.A.
Destination, rates & speeds