Items related to The Question That Never Goes Away: Why?

Yancey, Philip The Question That Never Goes Away: Why?

The Question That Never Goes Away: Why? 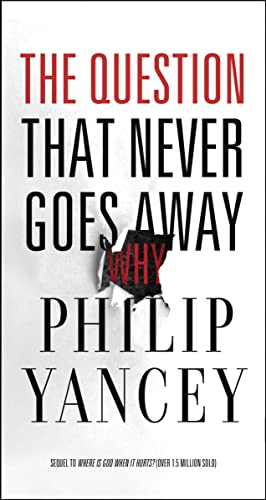 Finding Meaning in the Midst of Suffering

In his classic book Where Is God When It Hurts, Philip Yancey gave us permission to doubt, reasons not to abandon faith, and practical ways to reach out to hurting people.

And now, thirty years after writing his first book, Yancey revisits our cry of “Why, God” in three places stunned into silence by the calamities that have devastated them.  At some point all of us will face the challenges to faith Yancey writes about and look for the comfort and hope he describes.

There are reasons to ask, once again, the question that never goes away: Where is God when we suffer? And Yancey, once again, leads us to find faith when it is most severely put to the test.

Philip Yancey serves as editor-at-large for Christianity Today magazine. He has written thirteen Gold Medallion Award-winning books and won two ECPA Book of the Year awards for What's So Amazing About Grace? and The Jesus I Never Knew. Four of his books have sold over one million copies. Yancey lives with his wife in Colorado. Learn more at philipyancey.com

In his new book, Philip Yancey returns to the question, 'what is God up to in a world of such tragedy and pain?'. Many of his best-selling books have considered this, most difficult of question and with 'The Question that Never Goes Away' Yancey continues to express his own journey in print. Aslan Christian Books Philip Yancey is interviewed by Sharon Barnard, for Woman Alive Magazine. -- Sharon Barnard Woman Alive Magazine Philip Yancey is interviewed in The War Cry by Philip Halcrow -- Philip Halcrow The War Cry Philip Yancey is interviewed in Inspire by Sharon Barnard -- Sharon Barnard Inspire Filled with honest consideration and insight. This book is great for anyone wanting something easy to read but deep to consider. Together Magazine Philip Yancey has been the Church's go-to man on suffering since his first book, Where is God When it Hurts?, and is often invited to address trauma-struck communities such as Columbine, Fukushima and Sandy Hook. Such face-to-face meetings with survivors and the bereaved keep him from glib answers. He treats both tragedy and faith with equal respect in this reflective work. Fuelled by honesty, pithy stories, well-selected quotes and interesting touches ... this vivid book condenses observation and theology into a wise, sensitive and practical aid to understanding the brokenness around us and responding as God's presence in the lives of the hurting ... newcomers to his work will quickly see his great appeal as he offers helpful insight, freshly forged in the heat of very recent news stories. - **** -- DW Christianity Magazine Yancey is happy to consider ways in which suffering can lead to growth, and to emphasise resurrection and redemption. His first priority, however, is wise discernment of what would be best said to a particular suffering person, and what would be best not said. -- Rev. Andrew Davidson The Church Times There is much encouragement and hope contained within. Yancy writes with clarity and compassion. He does not under estimate the destructive force of suffering, neither does he attempt to provide neat, glib answers. --John Hughes Reflections

1. The Question That Never Goes Away: Why?

2. The Question That Never Goes Away: Why?

3. The Question That Never Goes Away: Why?

4. The Question That Never Goes Away

5. The Question That Never Goes Away: Why?