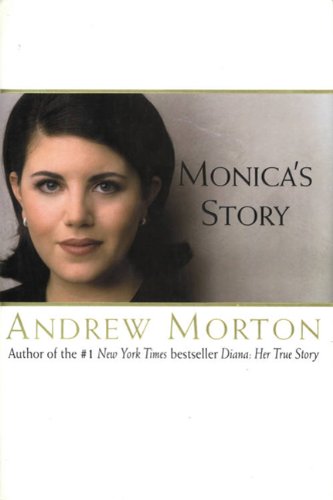 Recounts how an improper relationship and broken confidences led to threats of jail, public humiliation, and prejudgement in the media

Review:
Though it's a legal document, the Starr Report, published in late 1998, reads like a racy novel about the most powerful man in the world, President Bill Clinton, and a young intern, Monica Lewinsky, who's portrayed as a spoiled Beverly Hills brat performing oral sex on the president while he talked to colleagues on the telephone.

Andrew Morton, the author of Diana: Her True Story, spent several months interviewing Lewinsky after the scandal broke; the result is Monica's Story, which asserts that the picture the Starr Report paints of Lewinsky is totally incorrect. Morton believes she and the president had an emotional, mutually satisfying relationship, which, if circumstances had been different, would probably have remained secret. Although he covers much of the same territory as the Starr Report, he adds details of conversations Lewinsky and Clinton had in an attempt to show the depth of the relationship. In chapters with titles like "Grunge, Granola, and Andy" and "Terror in Room 1012," he paints a portrait of a "child-woman" who is sexually liberated but also intelligent, loving, and well mannered. "[She] could be anybody's sister," he insists, "anybody's daughter."

The book is most interesting, however, in its descriptions of the political intrigue, lies, and deception resulting from Kenneth Starr's investigation. Leading the evil band is Linda Tripp, described as a black-hearted, shameless manipulator who betrayed Lewinsky and spurred the scandal for her own personal gain (she was planning to write a book about Clinton). He also examines the media's hatred for Lewinsky--particularly that of women writers who became obsessed with her weight and body shape. "Just as the O.J. Simpson trial exposed the racial fault line running through American society," he argues, "so the Monica Lewinsky saga has spotlighted the underlying misogyny that still permeates American life." Monica's Story is gripping stuff--porn, fantasy, farce, political commentary, and tragedy all rolled into one. --Dale Kneen, Amazon.co.uk

From the Publisher:
Monica Lewinsky has been at the center of the most sensational political storm of our time...yet she has not said one word publicly about the scandal.

Now, in MONICA'S STORY, Andrew Morton can reveal the real Monica Lewinsky behind the sordid headlines. Like Morton's bestselling DIANA: HER TRUE STORY, the book will be based on long, tape-recorded interviews with the subject, her family and friends.

MONICA'S STORY will be published the same week the she finally breaks her silence in a special Barbara Walters interview, in late February. According to the New York Times, the two have already met:
"She is well-spoken. She is intelligent," Ms. Walters told The New York Times, "There's a lot not in the record--what this year has been like for her, what it felt like when the president made his statements, her reaction, her views on the various people involved, the jokes."

WE'VE HEARD FROM CLINTON, STARR, CONGRESS AND THE PUNDITS. NOW IT'S TIME FOR MONICA'S STORY.