Items related to Middlesex: A Novel 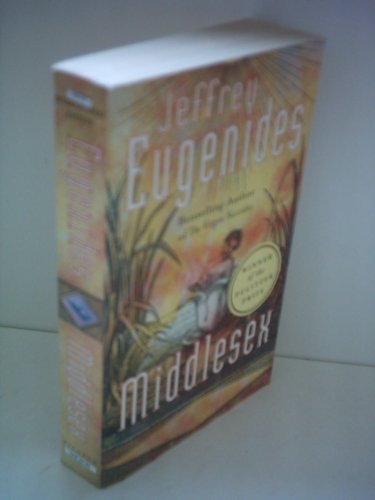 "I was born twice: first, as a baby girl, on a remarkably smogless Detroit day of January 1960; and then again, as a teenage boy, in an emergency room near Petoskey, Michigan, in August of l974. . . My birth certificate lists my name as Calliope Helen Stephanides. My most recent driver’s license...records my first name simply as Cal."

So begins the breathtaking story of Calliope Stephanides and three generations of the Greek-American Stephanides family who travel from a tiny village overlooking Mount Olympus in Asia Minor to Prohibition-era Detroit, witnessing its glory days as the Motor City, and the race riots of l967, before they move out to the tree-lined streets of suburban Grosse Pointe, Michigan. To understand why Calliope is not like other girls, she has to uncover a guilty family secret and the astonishing genetic history that turns Callie into Cal, one of the most audacious and wondrous narrators in contemporary fiction. Lyrical and thrilling, Middlesex is an exhilarating reinvention of the American epic.

"I was born twice: first, as a baby girl, on a remarkably smogless Detroit day in January of 1960; and then again, as a teenage boy, in an emergency room near Petoskey, Michigan, in August of 1974." And so begins Middlesex, the mesmerizing saga of a near-mythic Greek American family and the "roller-coaster ride of a single gene through time." The odd but utterly believable story of Cal Stephanides, and how this 41-year-old hermaphrodite was raised as Calliope, is at the tender heart of this long-awaited second novel from Jeffrey Eugenides, whose elegant and haunting 1993 debut, The Virgin Suicides, remains one of the finest first novels of recent memory.

Eugenides weaves together a kaleidoscopic narrative spanning 80 years of a stained family history, from a fateful incestuous union in a small town in early 1920s Asia Minor to Prohibition-era Detroit; from the early days of Ford Motors to the heated 1967 race riots; from the tony suburbs of Grosse Pointe and a confusing, aching adolescent love story to modern-day Berlin. Eugenides's command of the narrative is astonishing. He balances Cal/Callie's shifting voices convincingly, spinning this strange and often unsettling story with intelligence, insight, and generous amounts of humor:

Emotions, in my experience aren't covered by single words. I don't believe in "sadness," "joy," or "regret." ... I'd like to have at my disposal complicated hybrid emotions, Germanic traincar constructions like, say, "the happiness that attends disaster." Or: "the disappointment of sleeping with one's fantasy." ... I'd like to have a word for "the sadness inspired by failing restaurants" as well as for "the excitement of getting a room with a minibar." I've never had the right words to describe my life, and now that I've entered my story, I need them more than ever.

When you get to the end of this splendorous book, when you suddenly realize that after hundreds of pages you have only a few more left to turn over, you'll experience a quick pang of regret knowing that your time with Cal is coming to a close, and you may even resist finishing it--putting it aside for an hour or two, or maybe overnight--just so that this wondrous, magical novel might never end. --Brad Thomas Parsons

“This novel is longer, more populated, sadder, funnier, bigger in every way than its predecessor. What hasn’t changed is what set its author apart in the first place: an empathy and curiosity that ranges across generations and gender, and a willingness to enter heavily mined areas -- especially with regard to sex -- where lesser writers fear to tread…. Eugenides has taken all the trials and joys of the traditional coming-of-age novel and in one fell swoop made them twice (three times?) as rich.” -- The Gazette (Montreal)

“Delightful…. infectious… bold… The story is more about genetics than gender confusion, more family saga than freak show…. It’s about the transatlantic journey of a single gene and how the vagaries of love and hate generations removed come to bear on an individual life.” -- The Globe and Mail

“[Since The Virgin Suicides] we’ve been wanting a big fat novel that would consume us…. We have it now. I just finished reading it. Middlesex is in every way that big novel.” -- The Vancouver Sun

"He has emerged as the great American writer that many of us suspected him of being." -- Jeff Turrentine, Los Angeles Times Book Review

"Sweeps the reader along with easy grace and charm, concealing . . . the ache of earned wisdom beneath bushels of inventive storytelling" -- Adam Begley , The New York Observer

“...an uproarious epic, at once funny and sad, about misplaced identities and family secrets.... Mr. Eugenides has a keen sociological eye for 20th-century American life.... But it's his emotional wisdom, his nuanced insight into his characters' inner lives, that lends this book its cumulative power.” -- Michiko Kakutani, The New York Times

“delightful... a big-hearted engine of a novel [with] epic-proportioned emotions and an intelligent, exuberant voice.” -- Zsuzsi Gartner, The Globe and Mail

“The pay-off for the reader is huge. Eugenides has taken all the trials and joys of the traditional coming-of-age novel and made them twice (three times?) as rich.” -- The Montreal Gazette

“Jeffrey Eugenides’ expansive and radiantly generous second novel … feels rich with treats, including some handsome writing….One of the delights of Middlesex is how soundly it’s constructed, with motifs and characters weaving through the novel’s various episodes, pulling it tight. The book’s length feels like its author’s arms are stretching farther and farther to encompass more people, more life…. It is a colossal act of curiosity, of imagination and of love.” -- The New York Times Review of Books

"Perhaps the most wonderful thing about the book is Eugenides’ ability to feel his way into the girl, Callie, and the man,Cal. It’s difficult to imagine any serious male writer of earlier eras so effortlessly transcending the stereotypes of gender. This is one determinedly literary novel that should also appeal to a large, general audience." -- Publisher's Weekly

“Jeffrey Eugenides is a big and big-hearted talent, and Middlesex is a weird, wonderful novel that will sweep you off your feet.” -- Jonathan Franzen

“Wildly imaginative and engrossing . . . [ Middlesex] skillfully bends our notions of gender . . . with its affecting characterization of a brave and lonely soul and its vivid depiction of exactly what it means to be both male and female.” -- Booklist


From the Hardcover edition.

Shipping: US$ 61.40
From United Kingdom to U.S.A.
Destination, rates & speeds