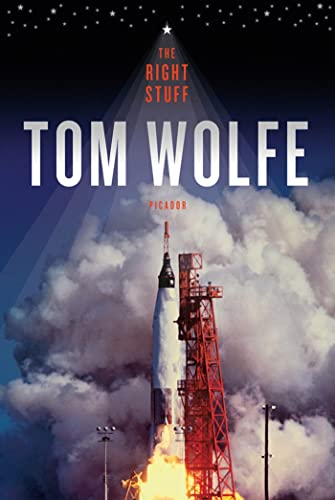 From "America's nerviest journalist" (Newsweek)--a breath-taking epic, a magnificent adventure story, and an investigation into the true heroism and courage of the first Americans to conquer space. "Tom Wolfe at his very best" (The New York Times Book Review)

Millions of words have poured forth about man's trip to the moon, but until now few people have had a sense of the most engrossing side of the adventure; namely, what went on in the minds of the astronauts themselves - in space, on the moon, and even during certain odysseys on earth. It is this, the inner life of the astronauts, that Tom Wolfe describes with his almost uncanny empathetic powers, that made The Right Stuff a classic.

Tom Wolfe began The Right Stuff at a time when it was unfashionable to contemplate American heroism. Nixon had left the White House in disgrace, the nation was reeling from the catastrophe of Vietnam, and in 1979--the year the book appeared--Americans were being held hostage by Iranian militants. Yet it was exactly the anachronistic courage of his subjects that captivated Wolfe. In his foreword, he notes that as late as 1970, almost one in four career Navy pilots died in accidents. "The Right Stuff," he explains, "became a story of why men were willing--willing?--delighted!--to take on such odds in this, an era literary people had long since characterized as the age of the anti-hero."

Wolfe's roots in New Journalism were intertwined with the nonfiction novel that Truman Capote had pioneered with In Cold Blood. As Capote did, Wolfe tells his story from a limited omniscient perspective, dropping into the lives of his "characters" as each in turn becomes a major player in the space program. After an opening chapter on the terror of being a test pilot's wife, the story cuts back to the late 1940s, when Americans were first attempting to break the sound barrier. Test pilots, we discover, are people who live fast lives with dangerous machines, not all of them airborne. Chuck Yeager was certainly among the fastest, and his determination to push through Mach 1--a feat that some had predicted would cause the destruction of any aircraft--makes him the book's guiding spirit.

Yet soon the focus shifts to the seven initial astronauts. Wolfe traces Alan Shepard's suborbital flight and Gus Grissom's embarrassing panic on the high seas (making the controversial claim that Grissom flooded his Liberty capsule by blowing the escape hatch too soon). The author also produces an admiring portrait of John Glenn's apple-pie heroism and selfless dedication. By the time Wolfe concludes with a return to Yeager and his late-career exploits, the narrative's epic proportions and literary merits are secure. Certainly The Right Stuff is the best, the funniest, and the most vivid book ever written about America's manned space program. --Patrick O'Kelley