Items related to The Housekeeper and the Professor

Yoko Ogawa The Housekeeper and the Professor 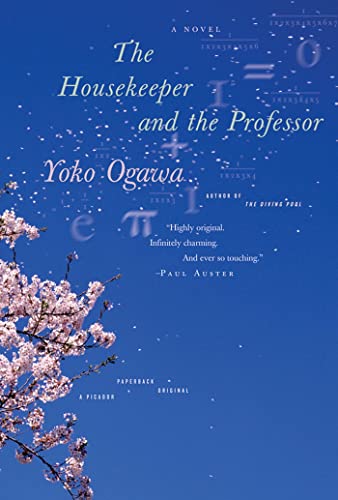 Yoko Ogawa's The Housekeeper and the Professor is an enchanting story about what it means to live in the present, and about the curious equations that can create a family.

He is a brilliant math Professor with a peculiar problem―ever since a traumatic head injury, he has lived with only eighty minutes of short-term memory.

She is an astute young Housekeeper―with a ten-year-old son―who is hired to care for the Professor.
And every morning, as the Professor and the Housekeeper are introduced to each other anew, a strange and beautiful relationship blossoms between them. Though he cannot hold memories for long (his brain is like a tape that begins to erase itself every eighty minutes), the Professor's mind is still alive with elegant equations from the past. And the numbers, in all of their articulate order, reveal a sheltering and poetic world to both the Housekeeper and her young son. The Professor is capable of discovering connections between the simplest of quantities―like the Housekeeper's shoe size―and the universe at large, drawing their lives ever closer and more profoundly together, even as his memory slips away.

Yoko Ogawa's fiction has appeared in The New Yorker, A Public Space, and Zoetrope. Since 1988 she has published more than twenty works of fiction and nonfiction, and has won every major Japanese literary award. Her books include The Housekeeper and the Professor, Revenge, and The Diving Pool.

Of all the countless things my son and I learned from the Professor, the meaning of the square root was among the most important. No doubt he would have been bothered by my use of the word countless--too sloppy, for he believed that the very origins of the universe could be explained in the exact language of numbers--but I don’t know how else to put it. He taught us about enormous prime numbers with more than a hundred thousand places, and the largest number of all, which was used in mathematical proofs and was in the Guinness Book of Records, and about the idea of something beyond infinity. As interesting as all this was, it could never match the experience of simply spending time with the Professor. I remember when he taught us about the spell cast by placing numbers under this square root sign. It was a rainy evening in early April. My son’s schoolbag lay abandoned on the rug. The light in the Professor’s study was dim. Outside the window, the blossoms on the apricot tree were heavy with rain.

The Professor never really seemed to care whether we figured out the right answer to a problem. He preferred our wild, desperate guesses to silence, and he was even more delighted when those guesses led to new problems that took us beyond the original one. He had a special feeling for what he called the “correct miscalculation,” for he believed that mistakes were often as revealing as the right answers. This gave us confidence even when our best efforts came to nothing.

“Then what happens if you take the square root of negative one?” he asked.

“So you’d need to get -1 by multiplying a number by itself?”

He didn’t press us. On the contrary, he fondly studied our expressions as we mulled over the problem.

“There is no such number,“ I said at last, sounding rather tentative.

“Yes, there is,“ he said, pointing at his chest. “It’s in here. It’s the most discreet sort of number, so it never comes out where it can be seen. But it’s here.” We fell silent for a moment, trying to picture the square root of minus one in some distant, unknown place. The only sound was the rain falling outside the window. My son ran his hand over his head, as if to confirm the shape of the square root symbol.

But the Professor didn’t always insist on being the teacher. He had enormous respect for matters about which he had no knowledge, and he was as humble in such cases as the square root of negative one itself. Whenever he needed my help, he would interrupt me in the most polite way. Even the simplest request--that I help him set the timer on the toaster, for example--always began with “I’m terribly sorry to bother you, but...” Once I’d set the dial, he would sit peering in as the toast browned. He was as fascinated by the toast as he was by the mathematical proofs we did together, as if the truth of the toaster were no different from that of the Pythagorean theorem.

It was March of 1992 when the Akebono Housekeeping Agency first sent me to work for the Professor. At the time, I was the youngest woman registered with the agency, which served a small city on the Inland Sea, although I already had more than ten years of experience. I managed to get along with all sorts of employers, and even when I cleaned for the most difficult clients, the ones no other housekeeper would touch, I never complained. I prided myself on being a true professional.

In the Professor’s case, it only took a glance at his client card to know that he might be trouble. A blue star was stamped on the back of the card each time a housekeeper had to be replaced, and there were already nine stars on the Professor’s card, a record during my years with the agency.

When I went for my interview, I was greeted by a slender, elegant old woman with dyed brown hair swept up in a bun. She wore a knit dress and walked with a cane.

“You will be taking care of my brother-in-law,“ she said. I tried to imagine why she would be responsible for her husband’s brother. “None of the others have lasted long,“ she continued. “Which has been a terrible inconvenience for me and for my brother-in-law. We have to start again every time a new housekeeper comes.... The job isn’t complicated. You would come Monday through Friday at 11:00 A.M., fix him lunch, clean the house, do the shopping, make dinner, and leave at 7:00 P.M. That’s the extent of it.”

There was something hesitant about the way she said the words brother-in-law. Her tone was polite enough, but her left hand nervously fingered her cane. Her eyes avoided mine, but occasionally I caught her casting a wary glance in my direction.

“The details are in the contract I signed with the agency. I’m simply looking for someone who can help him live a normal life, like anyone else.”

“Is your brother-in-law here?” I asked. She pointed with the cane to a cottage at the back of the garden behind the house. A red slate roof rose above a neatly pruned hedge of scarlet hawthorn.

“I must ask you not to come and go between the main house and the cottage. Your job is to care for my brother-in-law, and the cottage has a separate entrance on the north side of the property. I would prefer that you resolve any difficulties without consulting me. That’s the one rule I ask you to respect.” She gave a little tap with her cane.

I was used to absurd demands from my employers--that I wear a different color ribbon in my hair every day; that the water for tea be precisely 165 degrees; that I recite a little prayer every evening when Venus rose in the night sky--so the old woman’s request struck me as relatively straightforward.

“Could I meet your brother-in-law now?” I asked.

“That won’t be necessary.” She refused so flatly that I thought I had offended her. “If you met him today, he wouldn’t remember you tomorrow.”

“He has difficulties with his memory,“ she said. “He’s not senile; his brain works well, but about seventeen years ago he hit his head in an automobile accident. Since then, he has been unable to remember anything new. His memory stops in 1975. He can remember a theorem he developed thirty years ago, but he has no idea what he ate for dinner last night. In the simplest terms, it’s as if he has a single, eighty-minute videotape inside his head, and when he records anything new, he has to record over the existing memories. His memory lasts precisely eighty minutes--no more and no less.” Perhaps because she had repeated this explanation so many times in the past, the old woman ran through it without pause, and with almost no sign of emotion.

How exactly does a man live with only eighty minutes of memory? I had cared for ailing clients on more than one occasion in the past, but none of that experience would be useful here. I could just picture a tenth blue star on the Professor’s card.

From the main house, the cottage appeared deserted. An old-fashioned garden door was set into the hawthorn hedge, but it was secured by a rusty lock that was covered in bird droppings.

“Well then, I’ll expect you to start on Monday,“ the old woman said, putting an end to the conversation. And that’s how I came to work for the Professor.

The Housekeeper and the Professor (Paperback or Softback)

The Housekeeper and the Professor Format: Paperback