Items related to Take Your Pleasure Where You Find It

Mason, J. D. Take Your Pleasure Where You Find It

Take Your Pleasure Where You Find It 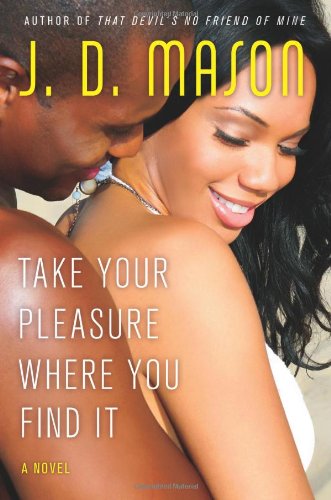 Thirty years ago, three high school friends were closer than sisters, but a dark, emotional secret tore them apart.  Now, back together at their high school reunion, each of them are tormented and haunted that their greatest fear will come to light.

Renetta Jones' childhood had been anything but happy.  After her mother walked out on them, Renetta was left to live with an unsympathetic father and her own insecurities.  She fell for the first man to come along after high school, and spent years in an abusive marriage with a man named Vincent, who used her secret to control and punish her. That is, until he suffered an untimely stroke, under questionable circumstances.

Phyllis Neville sacrificed everything for her career, including her marriage to a man she'll love forever, and a positive relationship with her adult daughter.  But when she is passed over for the promotion of a lifetime, it’s just the first thing to go wrong in her once perfect life as the past rears its ugly head.

Freddie Palmer is bored by the routine that her life has become.  Married thirty years to her husband, Don, the two of them have become empty-nesters and Freddie is anxious to start the next phase of her life.  After meeting successful author, Bianca Hightower, at a local bookstore signing, Freddie decides to take her passion for reading to the next level and signs up for writing classes being taught by her new author friend.  But Bianca sees potential in Freddie that transcends simply writing, and introduces her to the kinds of experiences a woman like Freddie never even knew existed. But when the past catches up to her, it becomes one more dark secret she’s not sure she’ll be able to keep.

Tasha Darden has lived her life in foster care, and has finally gathered up the courage to try to find her birth mother. One of the three women holds the answers she seeks and she will stop at nothing until she gets them.

J.D. MASON is the author of That Devil's No Friend Of Mine, You Gotta Sin To Get Saved, This Fire Down In My Soul, Don't Want No Sugar, And On The Eighth Day She Rested, and One Day I Saw A Black King. She lives in Denver, Colorado with her two children.

1. Take Your Pleasure Where You Find It

2. TAKE YOUR PLEASURE WHERE YOU FIN