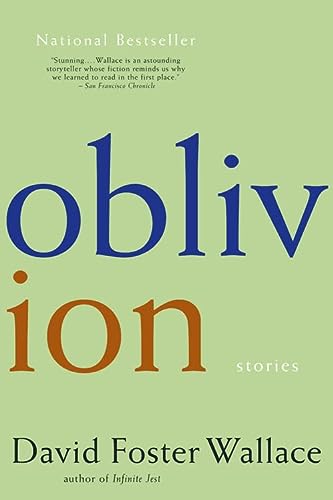 In the stories that make up Oblivion, David Foster Wallace joins the rawest, most naked humanity with the infinite involutions of self-consciousness--a combination that is dazzlingly, uniquely his.
These are worlds undreamt of by any other mind. Only David Foster Wallace could convey a father's desperate loneliness by way of his son's daydreaming through a teacher's homicidal breakdown ("The Soul Is Not a Smithy"). Or could explore the deepest and most hilarious aspects of creativity by delineating the office politics surrounding a magazine profile of an artist who produces miniature sculptures in an anatomically inconceivable way ("The Suffering Channel"). Or capture the ache of love's breakdown in the painfully polite apologies of a man who believes his wife is hallucinating the sound of his snoring ("Oblivion").
Each of these stories is a complete world, as fully imagined as most entire novels, at once preposterously surreal and painfully immediate.

David Foster Wallace was born in Ithaca, New York, in 1962 and raised in Illinois, where he was a regionally ranked junior tennis player. He received bachelor of arts degrees in philosophy and English from Amherst College and wrote what would become his first novel, The Broom of the System, as his senior English thesis. He received a masters of fine arts from University of Arizona in 1987 and briefly pursued graduate work in philosophy at Harvard University. His second novel, Infinite Jest, was published in 1996. Wallace taught creative writing at Emerson College, Illinois State University, and Pomona College, and published the story collections Girl with Curious Hair, Brief Interviews with Hideous Men, Oblivion, the essay collections A Supposedly Fun Thing I'll Never Do Again, and Consider the Lobster. He was awarded the MacArthur Fellowship, a Lannan Literary Award, and a Whiting Writers' Award, and was appointed to the Usage Panel for The American Heritage Dictionary of the English Language. He died in 2008. His last novel, The Pale King, was published in 2011.

In his best work, Infinite Jest, Wallace leavened his smartest-boy-in-class style, perfected in his essays and short stories, with a stereoscopic reproduction of other voices. Wallace's trademark, however, is an officious specificity, typical of the Grade A student overreaching: shifting levels of microscopic detail and self-reflection. This collection of eight stories highlights both the power and the weakness of these idiosyncrasies. The best story in the book, "Philosophy and the Mirror of Nature," assembles a typical Wallaceian absurdity: a paroled, autodidactic arachnophile accompanies his mother, the victim of plastic surgery malpractice ("the cosmetic surgeon botched it and did something to the musculature of her face which caused her to look insanely frightened at all times"), on a bus ride to a lawyer's office. "The Suffering Channel" moves from the grotesque to the gross-out, as a journalist for Style (a celebrity magazine) pursues a story about a man whose excrement comes out as sculpture. The title story, about a man and wife driven to visit a sleep clinic, is narrated by the husband, who soon reveals himself to be the tedious idiot his father-in-law takes him for. While this collection may please Wallace's most rabid fans, others will be disappointed that a writer of so much talent seems content, this time around, to retreat into a set of his most overused stylistic quirks.
Copyright © Reed Business Information, a division of Reed Elsevier Inc. All rights reserved.