Items related to The Devil's Highway: A True Story 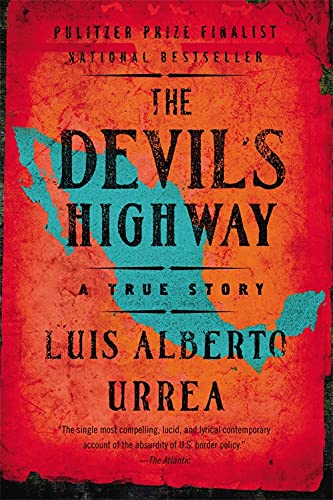 In a new 10th anniversary edition: "The single most compelling, lucid, and lyrical contemporary account of the absurdity of U.S. border policy" (The Atlantic).

In May 2001, a group of men attempted to cross the Mexican border into the desert of southern Arizona, through the deadliest region of the continent, the "Devil's Highway." Three years later, Luis Alberto Urrea wrote about what happened to them. The result was a national bestseller, a Pulitzer Prize finalist, a "book of the year" in multiple newspapers, and a work proclaimed as a modern American classic.

A finalist for the Pulitzer Prize for his landmark work of nonfiction The Devil's Highway, Luis Alberto Urrea is also the bestselling author of the novels The Hummingbird's Daughter, Into the Beautiful North, and Queen of America, as well as the story collection The Water Museum, a PEN/Faulkner Award finalist. He has won the Lannan Literary Award, an Edgar Award, and a 2017 American Academy of Arts and Letters Award in Literature, among many other honors. Born in Tijuana to a Mexican father and American mother, he lives outside of Chicago and teaches at the University of Illinois-Chicago.

In May 2001, 26 Mexican men scrambled across the border and into an area of the Arizona desert known as the Devil's Highway. Only 12 made it safely across. American Book Awardâ€"winning writer and poet Urrea (Across the Wire; Six Kinds of Sky; etc.), who was born in Tijuana and now lives outside Chicago, tracks the paths those men took from their home state of Veracruz all the way norte. Their enemies were many: the U.S. Border Patrol ("La Migra"); gung-ho gringo vigilantes bent on taking the law into their own hands; the Mexican Federales; rattlesnakes; severe hypothermia and the remorseless sun, a "110 degree nightmare" that dried their bodies and pounded their brains. In artful yet uncomplicated prose, Urrea captivatingly tells how a dozen men squeezed by to safety, and how 14 othersâ€"whom the media labeled the Yuma 14â€"did not. But while many point to the group's smugglers (known as coyotes) as the prime villains of the tragedy, Urrea unloads on, in the words of one Mexican consul, "the politics of stupidity that rules both sides of the border." Mexican and U.S. border policy is backward, Urrea finds, and it does little to stem the flow of immigrants. Since the policy results in Mexicans making the crossing in increasingly forbidding areas, it contributes to the conditions that kill those who attempt it. Confident and full of righteous rage, Urrea's story is a well-crafted mĂ©lange of first-person testimony, geographic history, cultural and economic analysis, poetry and an indictment of immigration policy. It may not directly influence the forces behind the U.S.'s southern border travesties, but it does give names and identities to the faceless and maligned "wetbacks" and "pollos," and highlights the brutality and unsustainable nature of the many walls separating the two countries. Maps not seen by PW.
Copyright © Reed Business Information, a division of Reed Elsevier Inc. All rights reserved.

The Devil's Highway: A True Story (Paperback or Softback)