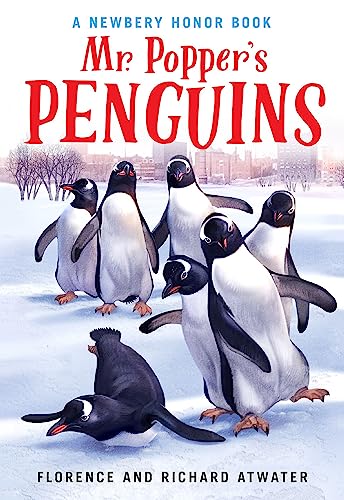 A classic of American humor, the adventures of a house painter and his brood of high-stepping penguins have delighted children for generations. "Here is a book to read aloud in groups of all ages. There is not an extra or misplaced word in the whole story."--The Horn Book. Newbery Honor Book.

More than 60 years have not dated this wonderfully absurd tale--it still makes kids (and parents) laugh out loud. Poor Mr. Popper isn't exactly unhappy; he just wishes he had seen something of the world before meeting Mrs. Popper and settling down. Most of all, he wishes he had seen the Poles, and spends his spare time between house-painting jobs reading all about polar explorations. Admiral Drake, in response to Mr. Popper's fan letter, sends him a penguin; life at 432 Proudfoot Avenue is never the same again. From one penguin living in the icebox, the Popper family grows to include 12 penguins, all of whom must be fed. Thus is born "Popper's Performing Penguins, First Time on Any Stage, Direct from the South Pole." Their adventures while on tour are hilarious, with numerous slapstick moments as the penguins disrupt other acts and invade hotels. Classic chapter-a-night fun. (Ages 5 to 10) --Richard Farr

Before his death in 1948, Richard Atwater was a newspaper columnist and a professor of Greek. He is best known for writing Mr. Popper's Penguins with his wife, Florence, who finished the novel when he fell ill. Together, they were honored with the 1939 Newbery Honor Award.

Book Description Little, Brown & Company, United States, 2012. Paperback. Condition: New. Robert Lawson (illustrator). Reissue. Language: English. Brand new Book. The lovable Mr. Popper dreams of being an intrepid Antarctic explorer, living life among the penguins alongside his hero, Admiral Drake. So he is shocked one day when the admiral responds to his fan letter by sending him a real, live penguin! Soon, this penguin is joined by another and before long Mr. Popper has an ice-rink in the basement and a dozen delightful penguins living in his house. With barely enough money to feed his family and an increasing demand for raw fish and canned shrimp, what can the wonderfully imaginative Mr. Popper do but train his penguins and then take the show on the road!. Seller Inventory # ABZ9780316058438