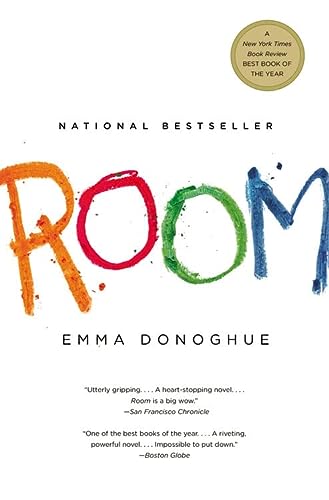 Held captive for years in a small shed, a woman and her precocious young son finally gain their freedom, and the boy experiences the outside world for the first time.
Inspiration for the MAJOR MOTION PICTURE starring Academy Award winner Brie Larson

To five-year-old-Jack, Room is the world. . . . It's where he was born, it's where he and his Ma eat and sleep and play and learn. At night, his Ma shuts him safely in the wardrobe, where he is meant to be asleep when Old Nick visits.

Room is home to Jack, but to Ma it's the prison where she has been held for seven years. Through her fierce love for her son, she has created a life for him in this eleven-by-eleven-foot space. But with Jack's curiosity building alongside her own desperation, she knows that Room cannot contain either much longer.

Room is a tale at once shocking, riveting, exhilarating--a story of unconquerable love in harrowing circumstances, and of the diamond-hard bond between a mother and her child.

Amazon Best of the Month, September 2010: In many ways, Jack is a typical 5-year-old. He likes to read books, watch TV, and play games with his Ma. But Jack is different in a big way--he has lived his entire life in a single room, sharing the tiny space with only his mother and an unnerving nighttime visitor known as Old Nick. For Jack, Room is the only world he knows, but for Ma, it is a prison in which she has tried to craft a normal life for her son. When their insular world suddenly expands beyond the confines of their four walls, the consequences are piercing and extraordinary. Despite its profoundly disturbing premise, Emma Donoghue's Room is rife with moments of hope and beauty, and the dogged determination to live, even in the most desolate circumstances. A stunning and original novel of survival in captivity, readers who enter Room will leave staggered, as though, like Jack, they are seeing the world for the very first time. --Lynette Mong

Born in Dublin in 1969, Emma Donoghue is an Irish emigrant twice over: she spent eight years in Cambridge doing a PhD in eighteenth-century literature before moving to London, Ontario, where she lives with her partner and their two children. She also migrates between genres, writing literary history, biography, stage and radio plays as well as fairy tales and short stories. She is best known for her novels, which range from the historical (Slammerkin, Life Mask, Landing, The Sealed Letter) to the contemporary (Stir-Fry, Hood, Landing). Her international bestseller Room was a New York Times Best Book of 2010 and was a finalist for the Man Booker, Commonwealth, and Orange Prizes. For more information, visit www.emmadonoghue.com.

Book Description Paperback. Condition: New. Paperback. Shipping may be from multiple locations in the US or from the UK, depending on stock availability. 321 pages. 0.390. Seller Inventory # 9780316098328

Book Description Back Bay Books, 2011. Trade Paperback. Condition: New. Firefly sells new and used books through our store front. We try to add a detailed description to as many titles as possible. If you have questions regarding this title, please contact us. Photos available on request. Seller Inventory # 248955