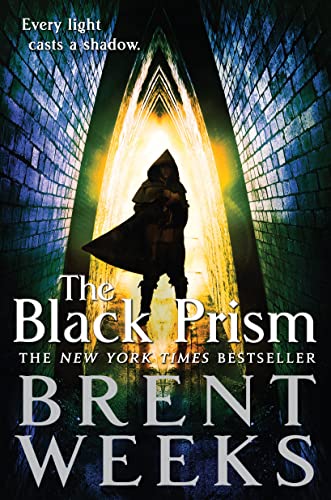 In a world where magic is tightly controlled, the most powerful man in history must choose between his kingdom and his son in the first book in the epic NYT bestselling Lightbringer series.
Guile is the Prism. He is high priest and emperor, a man whose power, wit, and charm are all that preserves a tenuous peace. Yet Prisms never last, and Guile knows exactly how long he has left to live.

When Guile discovers he has a son, born in a far kingdom after the war that put him in power, he must decide how much he's willing to pay to protect a secret that could tear his world apart.
If you loved the action and adventure of the Night Angel trilogy, you will devour this incredible epic fantasy series by Brent Weeks.

For more from Brent Weeks, check out:
Night Angel
The Way of Shadows
Shadow's Edge
Beyond the ShadowsPerfect Shadow: A Night Angel Novella

Brent Weeks was born and raised in Montana. He wrote on bar napkins and lesson plans before landing his dream job years and thousands of pages later. Brent lives in Oregon with his wife, Kristi, and their daughters. Find out more about the author at www.brentweeks.com or on twitter @brentweeks.

With this complicated fantasy about family politics, bestseller Weeks (The Way of Shadows) moves into familiar territory. An unloved, orphaned boy is the offspring of someone important; twins assume each other's identities; an aged ruler clings to power. Weeks manages to ring new tunes on these old bells, letting a deep background slowly reveal its secrets and presenting his characters in a realistically flawed and human way. Gavin Guile is facing his final five years as leader of a magical college whose members turn colors of light into various materials. Seeking to rectify the lingering wrongs from the war against his twin, Dazen, he is instead forced to acknowledge a bastard son, face down a corrupt governor, and stop a challenge to the state religion. Frequent perspective shifts keep the reader guessing as to who is heretic and who is hero. Author tour.
Copyright © Reed Business Information, a division of Reed Elsevier Inc. All rights reserved.