Items related to Shade: A Tale of Two Presidents 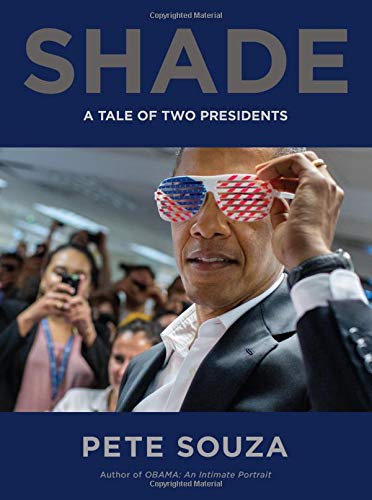 From Pete Souza, the #1 New York Times bestselling author of Obama: An Intimate Portrait, comes a potent commentary on the Presidency--and our country.
As Chief Official White House Photographer, Pete Souza spent more time alongside President Barack Obama than almost anyone else. His years photographing the President gave him an intimate behind-the-scenes view of the unique gravity of the Office of the Presidency--and the tremendous responsibility that comes with it.
Now, as a concerned citizen observing the Trump administration, he is standing up and speaking out.
Shade is a portrait in Presidential contrasts, telling the tale of the Obama and Trump administrations through a series of visual juxtapositions. Here, more than one hundred of Souza's unforgettable images of President Obama deliver new power and meaning when framed by the tweets, news headlines, and quotes that defined the first 500 days of the Trump White House.
What began with Souza's Instagram posts soon after President Trump's inauguration in January 2017 has become a potent commentary on the state of the Presidency, and our country. Some call this "throwing shade." Souza calls it telling the truth.
In Shade, Souza's photographs are more than a rejoinder to the chaos, abuses of power, and destructive policies that now define our nation's highest office. They are a reminder of a President we could believe in, and a courageous defense of American values.

"Powerful... A striking, at times even hilarious book, but by the end it leaves the reader with a profound sense of loss... Shade drives home Obama's humanity and dignity and Trump's petty mind and epic failings like few other documents."―Rolling Stone

"These juxtapositions of permanence and transience are ultimately what make Shade a compelling read; powerful, memorable portraits of an eight-year presidency stand beside headlines and tweets that surface on Twitter feeds for a few days at most and then are brushed aside amid new ones. The book is not just a tale of two presidents, but a tale of two political and media landscapes."―NPR

"As President Obama's photographer, Pete Souza was one of the very finest official White House snappers. In his provocative Shade: A Tale of Two Presidents, he contrasts pictures of the 44th incumbent with vignettes from the administration of the 45th to caustic effect."―Ben Schott, The Guardian

"Pete Souza became an Instagram celebrity by documenting the White House. Then he became an even bigger one by criticizing it."―New York Times

"A cool refuge from the heat of a very orange sun... [Shade] illustrate[s] the extent to which Obama's expansive ideals have been edged out by Trump's politics of meanness and resentment."―Shondaland

"Playful yet biting... commentary on Trump's current antics... to remind us what a president can be."―BookRiot