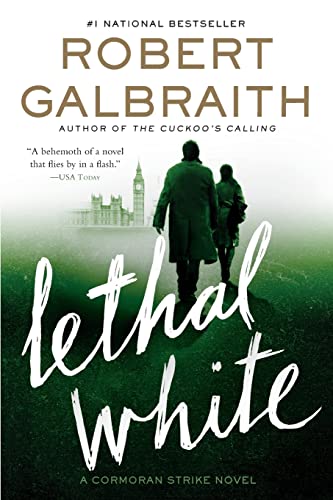 "Rowling's wizardry as a writer is on fulsome display" (USA Today) in this #1 New York Times bestseller from the international bestselling author Robert Galbraith.
When Billy, a troubled young man, comes to private eye Cormoran Strike's office to ask for his help investigating a crime he thinks he witnessed as a child, Strike is left deeply unsettled. While Billy is obviously mentally distressed, and cannot remember many concrete details, there is something sincere about him and his story. But before Strike can question him further, Billy bolts from his office in a panic.
Trying to get to the bottom of Billy's story, Strike and Robin Ellacott-once his assistant, now a partner in the agency-set off on a twisting trail that leads them through the backstreets of London, into a secretive inner sanctum within Parliament, and to a beautiful but sinister manor house deep in the countryside.
And during this labyrinthine investigation, Strike's own life is far from straightforward: his newfound fame as a private eye means he can no longer operate behind the scenes as he once did. Plus, his relationship with his former assistant is more fraught than it ever has been-Robin is now invaluable to Strike in the business, but their personal relationship is much, much trickier than that.
The most epic Robert Galbraith novel yet, Lethal White is both a gripping mystery and a page-turning next instalment in the ongoing story of Cormoran Strike and Robin Ellacott.

Robert Galbraith is a pseudonym for J.K. Rowling, bestselling author of the Harry Potter series and The Casual Vacancy. Lethal White is the fourth book in the highly acclaimed Cormoran Strike crime fiction series. The Cuckoo's Calling was published in 2013, The Silkworm in 2014, and Career of Evil in 2015.

"Rowling's wizardry as a writer is on fulsome display in Lethal White ( 3.5/4 stars), a behemoth of a novel that flies by in a flash. This is a crime series deeply rooted in the real world, where brutality and ugliness are leavened by the oh-so-human flaws and virtues of Galbraith's irresistible hero and heroine."―USA Today

"At times you might feel as you did when reading the Harry Potter books, particularly later in the series, when they got longer and looser. You love the plot, and you love being in the company of the characters, and you admire the author's voice and insights and ingenuity, and you relish the chance to relax into a book without feeling rushed or puzzled or shortchanged.... Long live the fertile imagination and prodigious output of J.K. Rowling."―The New York Times

"If you love the intricate, character-driven mysteries written by Tana French and Kate Atkinson, then chances are good that you'll enjoy the ones by Robert Galbraith. . . . Robert Galbraith knows how to tell a story every bit as deftly as does J.K. Rowling. Cormoran Strike, who lost a leg in Afghanistan, may limp painfully through much of the book, but the tale being told never misses a step."―Joyce Sáenz Harris, Dallas Morning News

"Even if the world is the seedy underbelly of contemporary London and not Magical Hogwarts, cracking the cover of a Galbraith novel is like stepping through a portal. You're immersed all at once."―Bustle

"One of contemporary crime fiction's most delightful partnerships."―Seattle Times

"Rowling deftly circumnavigates all of the tropes and constructs that have long since relegated the male-author-dominated thriller genre to a place of ridicule and sheer inanity."
―Tablet Magazine