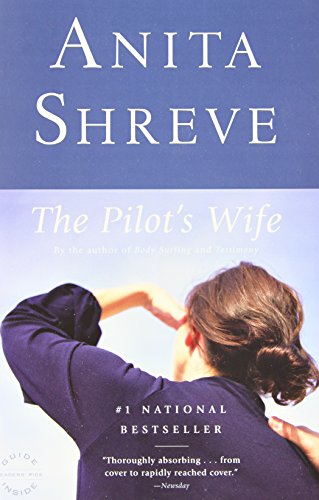 Anita Shreve's hauntingly beautiful #1 bestseller and Oprah's Book Club selection about tragedy, grief, betrayal, and the 'impossibility of knowing another person.'
As a pilot's wife, Kathryn has learned to expect both intense exhilaration and long periods alone, but nothing has prepared her for a late-night knock that lets her know her husband has died in a crash.
Until now, Kathryn Lyons's life has been peaceful if unextraordinary: a satisfying job teaching high school in the New England mill town of her childhood; a picture-perfect home by the ocean; a precocious, independent-minded fifteen-year-old daughter; and a happy marriage whose occasional dull passages she attributes to the unavoidable deadening of time.
As Kathryn struggles with her grief, she descends into a maelstrom of publicity stirred up by the modern hunger for the details of tragedy. Even before the plane is located in waters off the Irish coast, the relentless scrutiny of her husband's life begins to bring a bizarre personal mystery into focus. Could there be any truth to the increasingly disturbing rumors that he had a secret life?

Oprah Book Club® Selection, March 1999: With five novels to her credit, including the acclaimed The Weight of Water, Anita Shreve now offers a skillfully crafted exploration of the long reach of tragedy in The Pilot's Wife. News of Jack Lyons's fatal crash sends his wife into shock and emotional numbness:

Kathryn wished she could manage a coma. Instead, it seemed that quite the opposite had happened: She felt herself to be inside of a private weather system, one in which she was continuously tossed and buffeted by bits of news and information, sometimes chilled by thoughts of what lay immediately ahead, thawed by the kindness of others ... frequently drenched by memories that seemed to have no regard for circumstance or place, and then subjected to the nearly intolerable heat of reporters, photographers and curious on-lookers. It was a weather system with no logic, she had decided, no pattern, no progression, no form.

The situation becomes even more dire when the plane's black box is recovered, pinning responsibility for the crash on Jack. In an attempt to clear his name, Kathryn searches for any and all clues to the hours before the flight. Yet each discovery forces her to realize that she didn't know her husband of 16 years at all. Shreve's complex and highly convincing treatment of Kathryn's dilemma, coupled with intriguing minor characters and an expertly paced plot, makes The Pilot's Wife really take off. From the Publisher:

"Gripping. . . . A gentle romance and a tale of inner anguish. . . . You don't want to stop turning pages once Kathryn has opened her door." --Georgia Jones-Davis, Washington Post Book World

"Kathryn's emotional quest is masterfully rendered. . . . We go where Shreve leads because the writing is so sure." --Kate Callen, San Diego Union-Tribune

"Compulsively readable. . . . To create both sympathetic characters and an enticing plot is no small feat, but Shreve does it seamlessly. . . . Her characters' grief and disillusion are palpable, and their relationships are moving. . . . I'd recommend taking this book anywhere-except, perhaps, on a plane trip." --Susan Hubbard, Orlando Sentinel

"Highly readable. . . . Shreve is extremely skillful at showing the stages by which someone learns to live with the unthinkable." --Rebecca Radner, San Francisco Chronicle

"Enthralling. . . . Shreve's ear for the hazy dread of a tragedy's immediate aftermath is excellent. . . . She accumulates the details gradually and quietly, bringing to life the grief-stricken Kathryn and Mattie with fascinating exactitude." --Jelena Petrovic, Minneapolis Star Tribune

"The humanness of this novel, along with its attention to detail, makes this a provocative read. . . . While the story physically takes place in Ely, N.H., and extends to England and Ireland, there is much more exploration of a changing interior topogrpahy: the plateaus of normalcy, the valleys of sorrow, the vistas of strength. It is a story of a struggle to become self-reliant." --Angela Glaser, Milwaukee Journal Sentinel