Items related to Probability and Statistics for Engineers and Scientists...

Probability and Statistics for Engineers and Scientists (9th Edition) 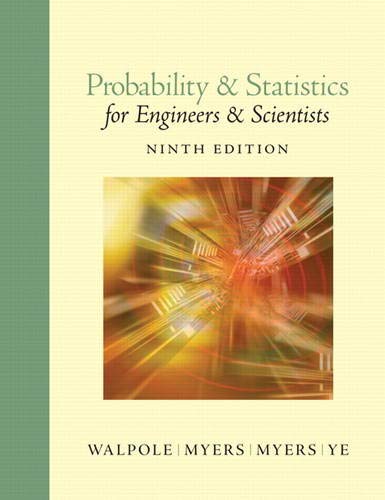 This classic text provides a rigorous introduction to basic probability theory and statistical inference, with a unique balance of theory and methodology. Interesting, relevant applications use real data from actual studies, showing how the concepts and methods can be used to solve problems in the field. This revision focuses on improved clarity and deeper understanding.

Educated at Harvard and Columbia, John McMurry has taught approximately 17,000 students in general and organic chemistry over a 30-year period. A Professor of Chemistry at Cornell University since 1980, Dr. McMurry previously spent 13 years on the faculty at the University of California at Santa Cruz. He has received numerous awards, including the Alfred P. Sloan Fellowship (1969–71), the National Institute of Health Career Development Award (1975–80), the Alexander von Humboldt Senior Scientist Award (1986–87), and the Max Planck Research Award (1991).

1. Probability and Statistics for Engineers and Scientists (9th Edition)

Book Description Pearson, 2011. Condition: New. Brand new book. This is an international edition textbook with identical content as the US version and is usually paperback bound instead of hardcover. We ship all our orders from CA/IL, USA (depending on your address) and NOT from Asia! Buy with confidence from a 5-star US based seller. Choose expedited shipping for superfast delivery with tracking. Seller Inventory # 1746|9780321629111

3. PROBABILITY AND STATISTICS FOR ENGINEERS AND SCIENTISTS (9TH EDITION)

Book Description Pearson, 2011. soft cover. Condition: New. International Edition. No supplemental materials. International Editions may have a different cover or ISBN but generally have the exact same content as the US edition, just at a more affordable price. In some cases, end of chapter questions may vary slightly from the US edition. International Editions are typically printed in grayscale, and likely will not have any color throughout the book. New. Books ship from multiple locations depending on availability. All orders are shipped with tracking information. We take pride in our customer service. Please contact us if you have any questions regarding this listing. Seller Inventory # 12615

5. Probability and Statistics for Engineers and Scientists (9th Edition)

6. Probability and Statistics for Engineers and Scientists (9th Edition)