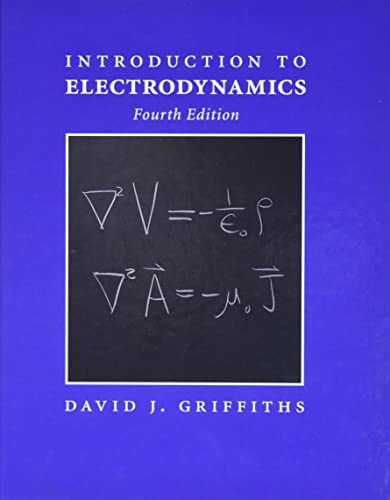 For junior/senior-level electricity and magnetism courses. This book is known for its clear, concise, and accessible coverage of standard topics in a logical and pedagogically sound order. The highly polished Fourth Edition features a clear, accessible treatment of the fundamentals of electromagnetic theory, providing a sound platform for the exploration of related applications (ac circuits, antennas, transmission lines, plasmas, optics, etc.). Its lean and focused approach employs numerous new examples and problems.

A re-issued and affordable edition of the well-known undergraduate electrodynamics textbook. The Fourth Edition provides a rigorous, yet clear and accessible treatment of the fundamentals of electromagnetic theory and offers a sound platform for explorations of related applications (AC circuits, transmission lines, plasmas, optics and more).

David Griffiths received his BA and PhD from Harvard University. He held post-doctoral positions at the University of Utah and the University of Massachusetts (Amherst), and taught at Hampshire College, Mount Holyoke College, and Trinity College (Hartford) before joining the faculty at Reed College, where he has taught for over 30 years. In 2001-2002 he was visiting Professor of Physics at the Five Colleges (UMass, Amherst, Mount Holyoke, Smith, and Hampshire), and in the spring of 2007 he taught electrodynamics at Stanford.

Griffiths is a Consulting Editor of The American Journal of Physics, and a Fellow of the American Physical Society. In 1997 he was awarded the Millikan Medal by the American Association of Physics Teachers. He has spent sabbaticals at SLAC, Lawrence Berkeley Laboratory, and UC Berkeley. Although his PhD was in elementary particle theory, his recent research is in electrodynamics and quantum mechanics. He is the author of forty-five papers and three books: Introduction to Electrodynamics (Fourth Edition, Prentice Hall, 2013), Introduction to Elementary Particles (Second Edition, Wiley-VCH, 2008), and Introduction to Quantum Mechanics (Second Edition, Prentice Hall, 2005).

Book Description Pearson, 2012. Condition: New. Brand new book. This is an international edition textbook with identical content as the US version and is usually paperback bound instead of hardcover. We ship all our orders from CA/IL, USA (depending on your address) and NOT from Asia! Buy with confidence from a 5-star US based seller. Choose expedited shipping for superfast delivery with tracking. Seller Inventory # 81|9780321856562

Book Description Pearson, 2012. soft cover. Condition: New. International Edition. No supplemental materials. International Editions may have a different cover or ISBN but generally have the exact same content as the US edition, just at a more affordable price. In some cases, end of chapter questions may vary slightly from the US edition. International Editions are typically printed in grayscale, and likely will not have any color throughout the book. New. Books ship from multiple locations depending on availability. All orders are shipped with tracking information. We take pride in our customer service. Please contact us if you have any questions regarding this listing. Seller Inventory # 12786