Items related to Photographic Atlas for Anatomy & Physiology, A

Photographic Atlas for Anatomy & Physiology, A 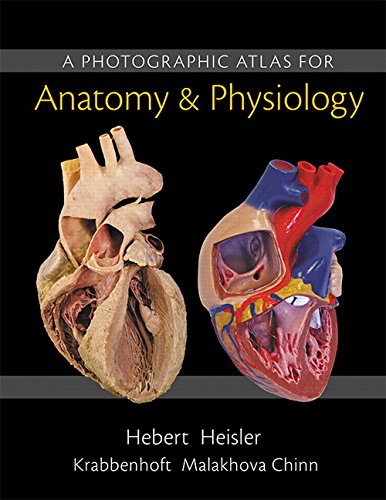 A Photographic Atlas for Anatomy & Physiology  is a new visual lab study tool that helps students learn and identify key anatomical structures. Featuring photos from Practice Anatomy Lab ™  3.1 and other sources, the Atlas includes over 250 cadaver dissection photos, histology photomicrographs, and cat dissection photos plus over 50 photos of anatomical models from leading manufacturers such as 3B Scientific®, SOMSO®, and Denoyer-Geppert Science Company. Two-page spreads with cadaver and anatomical model photos side-by-side help students to better learn and identify structures. The Atlas is composed of 13 chapters, organized by body system, and includes a final chapter with cat dissection photos. In each chapter, students will first explore gross anatomy, as seen on cadavers and anatomical models, and then conclude with relevant histological images.

Nora Hebert, Ph.D. teaches undergraduate courses in Anatomy and Physiology at Red Rocks Community College near Denver, Colorado. Although most of her students are undergraduates, primarily interested in the allied health professions, Nora has also taught graduate-level Human Physiology for the College’s Physician Assistant Program.

Nora is an active faculty member at Red Rocks, serving on the faculty senate, the honors program committee, and the admissions and executive committees for the Physician Assistant Program. She is also part of the College’s Campus Green Initiative.

Among her many academic projects, Nora has consulted in the development of an interactive virtual knee, known as the Explorable Virtual Human, with the Center for Human Simulation at the University of Colorado Health Sciences Center. She has also been involved with the Visible Human Dissector program, advising K-12 teachers and postsecondary instructors on how best to implement the Dissector in their classrooms. Nora has been deeply involved in the development of Practice Anatomy Lab, as coauthor of versions 2.0 and 3.0. She is also the author of over 60 A&P Flix animations covering muscle physiology, neurophysiology, and muscle origins, actions, insertions, and innervations.

Nora received a Ph.D. in Endocrinology from the University of California at Berkeley.

At the University of Colorado, Ruth has worked extensively with the Science Education Initiative to improve both the teaching and understanding of scientific material at the undergraduate level. In addition, she has been involved in academic outreach through workshops with the American Academy of Forensic Sciences and the Biological Sciences Initiative. She has been a consultant on projects with the Center for Human Simulation, working with data generated through the Visible Human Project.

Ruth has been deeply involved in the development of Practice Anatomy Lab, as coauthor of versions 2.0 and 3.0. She is also author of a custom laboratory manual developed for a large, cadaver-based human anatomy lab.

Jett Chinn is an instructor of Human Anatomy in the Science and Technology Division of Cañada College (Redwood City, CA) and also the Life and Earth Sciences Department at the College of Marin (Kentfield, CA).

Karen M. Krabbenhoft, Ph.D. is a senior lecturer in the Department of Neuroscience at the University of Wisconsin in Madison. During her 20-year career, Karen’s focus has been on teaching students at all levels of their educational process, including undergraduate, physician assistant, and medical students. She has been recognized by the University with several awards, including two Medical Alumni Association Distinguished Teaching Awards for the Basic Sciences (1998, 2007), the Dean’s Teaching Award (2000), and the Gender Equity Award (1998). Most recently, Karen was selected by the graduating class to receive the Pre-Clinical Teaching Award in 2011.

Karen earned her Ph.D. in Anatomy from the University of Wisconsin.

Olga’s teaching excellence has been recognized by several awards, including six Exemplary Teacher awards from the University of Florida. She was also recognized as a Master Educator by the University’s Medical Education Faculty Development Program (2006).

Olga received her M.D. from Odessa Medical Institute in Ukraine, and her Ph.D. in Neuroscience from the Brain Research Institute of the Russian Academy of Medical Sciences in Moscow.

1. A Photographic Atlas for Anatomy & Physiology

2. A Photographic Atlas for Anatomy & Physiology

3. A Photographic Atlas for Anatomy & Physiology

4. A Photographic Atlas for Anatomy & Physiology

5. Photographic Atlas for Anatomy & Physiology, A