Items related to Out of Sheer Rage: In the Shadow of D. H. Lawrence

Dyer, Geoff Out of Sheer Rage: In the Shadow of D. H. Lawrence

Out of Sheer Rage: In the Shadow of D. H. Lawrence 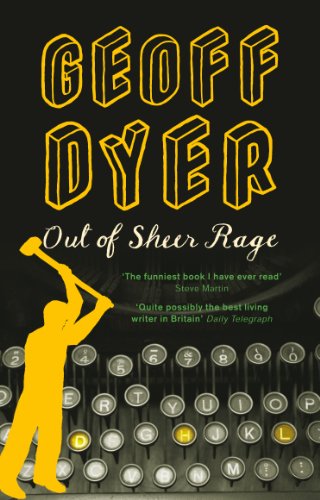 When he became interested in literature at grammar school, it was D.H. Lawrence who fired Geoff Dyer's imagination, and it was the figure of Lawrence, the miner's son who spent his life travelling, living by his pen, which made it seem possible to him to become a writer. The work is as much a travel book as a biography, as Geoff Dyer retraces Lawrence's journeys and, using Lawrence's own writings, life, and crucially, photographs as clues, learns much about matters close to his own heart as he does about Lawrence himself.

Out of Sheer Rage: Wrestling with D.H. Lawrence is the best book about not writing a book about D.H Lawrence ever written. Other people have written untraditional, even loopy tributes to the priest of love before--including boon companions Anais Nin and Henry Miller--but no one has done it with Dyer's chutzpah, or with such fantastic success.

Dyer started out with the intention of writing either a sober academic study of Lawrence or a novel based on his subject's life but couldn't seem to do either. The academic study, he realized, was really just an excuse to read Lawrence's work, and the novel never even acquired a rudimentary shape in his mind. Instead, he somehow convinced his publisher to pick up the tab for his lengthy globetrotting pilgrimage, which took him from Paris to Rome to Greece to Oxford--not to mention such Lawrentian hotspots as Taos and Mexico and San Francisco. The result is an extended, often hilarious, meditation on seafood, English TV, Dyer's own creative impulses, and occasionally even Lawrence.

In Lawrence's seminal prose he finds some justification for his own capricious indulgences: "What Lawrence's life demonstrates so powerfully is that it actually takes a daily effort to be free.... There are intervals of repose but there will never come a state of definitive rest where you can give up because you have turned freedom into a permanent condition. Freedom is always precarious." Yet he refuses to read Lawrence's novels, confining himself to letters, travel reportage, and other casuals. Indeed, "[o]ne gets so weary watching authors' sensations and thoughts get novelised, set into the concrete of fiction, that perhaps it is best to avoid the novel as a medium of expression."

Dyer's fascination with Lawrence's minorabilia suggests not only an oblique criticism of the contemporary novel, but a promising direction for the memoir. Perhaps clean, well-lighted subjectivity is a dead end, and the future lies with eccentric, provisional works along the lines of Flaubert's Parrot and How Proust Can Change Your Life--or Out of Sheer Rage. After all, Dyer's bright (and brilliantly shambolic) book of life reminds us of why we read in the first place: to see the surprising ways one person can be brought to life by another. --Michael Joseph Gross

'The funniest book I have ever read' Steve Martin