Items related to A Man in Full: A Novel

Tom Wolfe A Man in Full: A Novel 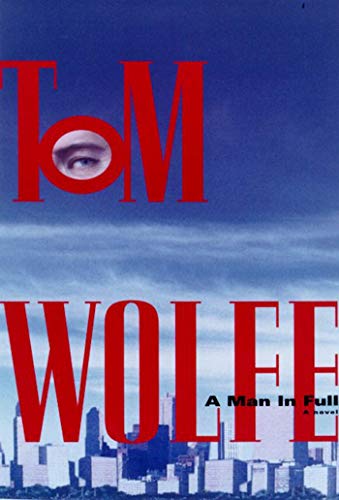 A decade ago, The Bonfire of the Vanities defined an era--and established Tom Wolfe as our prime fictional chronicler of America at its most outrageous and alive. This time the setting is Atlanta, Georgia--a racially mixed late-century boomtown full of fresh wealth, avid speculators, and worldly-wise politicians. The protagonist is Charles Croker, once a college football star, now a late-middle-aged Atlanta real-estate entrepreneur turned conglomerate king, whose expansionist ambitions and outsize ego have at last hit up against reality. Charlie has a 28,000-acre quail-shooting plantation, a young and demanding second wife--and a half-empty office tower with a staggering load of debt. When star running back Fareek Fanon--the pride of one of Atlanta's grimmest slums--is accused of raping an Atlanta blueblood's daughter, the city's delicate racial balance is shattered overnight. Networks of illegal Asian immigrants crisscrossing the continent, daily life behind bars, shady real-estate syndicates, cast-off first wives of the corporate elite, the racially charged politics of college sports--Wolfe shows us the disparate worlds of contemporary America with all the verve, wit, and insight that have made him our most phenomenal, most admired contemporary novelist.

A Man in Full is a 1998 National Book Award Finalist for Fiction.

Ever since he published his classic 1972 essay "Why They Aren't Writing the Great American Novel Anymore," Tom Wolfe has made his fictional preferences loud and clear. For New Journalism's poster boy, minimalism is a wash, not to mention a failure of nerve. The real mission of the American writer is to produce fat novels of social observation--the sort of thing Balzac would be dishing up if he had made it into the Viagra era. Wolfe's manifesto would have had a hubristic ring if he hadn't actually delivered the goods in 1987 with The Bonfire of the Vanities. Now, more than a decade later, he's back with a second novel. Has the Man in White lived up to his own mission?

On many counts, the answer would have to be yes. Like its predecessor, A Man in Full is a big-canvas work, in which a multitude of characters seems to be ascending or (rapidly) descending the greasy pole of social life: "In an era like this one," a character reminds us, "the twentieth century's fin de sičcle, position was everything, and it was the hardest thing to get." Wolfe has changed terrain on us, to be sure. Instead of New York, the focus here is Atlanta, Georgia, where the struggle for turf and power is at least slightly patinated with Deep South gentility. The plot revolves around Charlie Croker, an egomaniacal good ol' boy with a crumbling real-estate empire on his hands. But Wolfe is no less attentive to a pair of supporting players: a downwardly mobile family man, Conrad Hensley, and Roger White II, an African American attorney at a white-shoe firm. What ultimately causes these subplots to converge--and threatens to ignite a racial firestorm in Atlanta--is the alleged rape of a society deb by Georgia Tech football star Fareek "The Cannon" Fanon.

Of course, a detailed plot summary would be about as long as your average minimalist novel. Suffice it to say that A Man in Full is packed with the sort of splendid set pieces we've come to expect from Wolfe. A quail hunt on Charlie's 29,000-acre plantation, a stuffed-shirt evening at the symphony, a politically loaded press conference--the author assembles these scenes with contagious delight. The book is also very, very funny. The law firms, like upper-crust powerhouse Fogg Nackers Rendering & Lean, are straight out of Dickens, and Wolfe brings even his minor characters, like professional hick Opey McCorkle, to vivid life:

In true Opey McCorkle fashion he had turned up for dinner wearing a plaid shirt, a plaid necktie, red felt suspenders, and a big old leather belt that went around his potbelly like something could hitch up a mule with, but for now he had cut off his usual torrent of orotund rhetoric mixed with Baker Countyisms.

Readers in search of a kinder, gentler Wolfe may well be disappointed. Retaining the satirist's (necessary) superiority to his subject, he tends to lose his edge precisely when he's trying to move us. Still, when it comes to maximalist portraiture of the American scene--and to sheer, sentence-by-sentence amusement--1998 looks to be the year of the Wolfe, indeed. --James Marcus From the Inside Flap:

A decade ago, The Bonfire of the Vanities defined an era?and established Tom Wolfe as our prime fictional chronicler of America at its most outrageous and alive. Now the master is back with a pitch-perfect coast-to-coast portrait of our wild and wooly, no-holds-barred, multifarious country on the cusp of the millennium.

The setting is Atlanta, Georgia?a racially mixed, late-century boomtown full of fresh wealth and wily politicians. The protagonist is Charles Croker, once a college football star, now a late-middle-aged Atlanta conglomerate king whose outsize ego has at last hit up against reality. Charlie has a 29,000 acre quail-shooting plantation, a young and demanding second wife, and a half-empty office complex with a staggering load of debt.

Meanwhile, Conrad Hensley, idealistic young father of two, is laid off from his job at the Croker Global Foods warehouse near Oakland and finds himself spiraling into the lower depths of the American legal system. And back in Atlanta, when star Georgia Tech running back Fareek "the Canon" Fanon, a homegrown product of the city's slums, is accused of date-raping the daughter of a pillar of the white establishment, upscale black lawyer Roger White II is asked to represent Fanon and help keep the city's delicate racial balance from blowing sky-high.

Networks of illegal Asian immigrants crisscrossing the continent, daily life behind bars, shady real estate syndicates?Wolfe shows us contemporary America with all the verve, wit, and insight that have made him our most admired novelist. Charlie Croker's deliverance from his tribulations provides an unforgettable denouement to the most widely awaited, hilarious and telling novel America has seen in ages?Tom Wolfe's most outstanding achievement to date.

A Man In Full

A Man in Full (Hardback or Cased Book)

Man in Full : A Novel