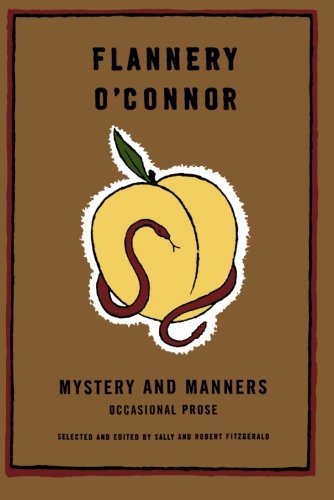 This bold and brilliant collection is a must for all readers, writers, and students of American literature

When she died in 1964, Flannery O'Connor left behind a body of unpublished essays and lectures as well as a number of critical articles that had appeared in scattered publications during her lifetime. The brilliant pieces in Mystery and Manners, selected and edited by O'Connor's lifelong friends Sally and Robert Fitzgerald, are characterized by the boldness and simplicity of her style, a fine-tuned wit, understated perspicacity, and profound faith.
The book opens with "The King of the Birds," her famous account of raising peacocks at her home in Milledgeville, Georgia. There are three essays on regional writing, including "The Fiction Writer and His Country" and "Some Aspects of the Grotesque in Southern Fiction"; two on teaching literature, including "Total Effect and the Eighth Grade"; and four on the writer and religion, including "The Catholic Novel in the Protestant South." Essays such as "The Nature and Aim of Fiction" and "Writing Short Stories" are gems. Their value to the contemporary reader―and writer―is inestimable.

“Flannery O'Connor ranks with Mark Twain and Scott Fitzgerald among our finest prose stylists. Her epigrams alone are worth the price of the book . . . which should be read by every writer and would-be writer and lover of writing.” ―John Leonard, The New York Times

“[O'Connor] was not just the best 'woman writer' of [her] time and place; she expressed something secret about America, called 'the South,' with that transcendent gift for expressing the real spirit of a culture that is conveyed by those writers . . . who become nothing but what they see. Completeness is one word for it: relentlessness [and] unsparingness would be others. She was a genius.” ―Alfred Kazin, The New York Times Book Review