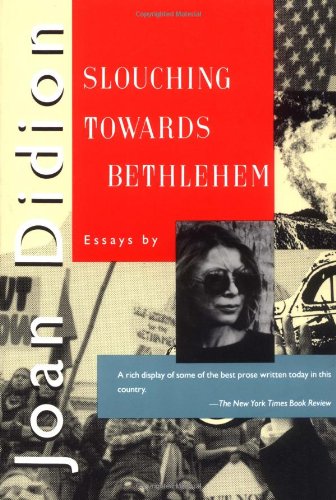 Universally acclaimed when it was first published in 1968, Slouching Towards Bethlehem has become a modern classic. More than any other book of its time, this collection captures the mood of 1960s America, especially the center of its counterculture, California. These essays, keynoted by an extraordinary report on San Francisco's Haight-Ashbury, all reflect that, in one way or another, things are falling apart, "the center cannot hold." An incisive look at contemporary American life, Slouching Towards Bethlehem has been admired for several decades as a stylistic masterpiece.

II. PERSONALS
On Keeping a Notebook
On Self-Respect
I Can't Get That Monster out of My Mind
On Morality
On Going Home

III. SEVEN PLACES OF THE MIND
Notes from a Native Daughter
Letter from Paradise, 21° 19' N., 157° 52' W
Rock of Ages
The Seacoast of Despair
Guaymas, Sonora
Los Angeles Notebook
Goodbye to All That

Upon its publication in 1968, Slouching Towards Bethlehem confirmed Joan Didion as one of the most prominent writers on the literary scene. Her unblinking vision and deadpan tone have influenced subsequent generations of reporters and essayists, changing our expectations of style, voice, and the artistic possibilities of nonfiction.
"In her portraits of people," "The New York Times Book Review wrote, "Didion is not out to expose but to understand, and she shows us actors and millionaires, doomed brides and naive acid-trippers, left-wing ideologues and snobs of the Hawaiian aristocracy in a way that makes them neither villainous nor glamorous, but alive and botched and often mournfully beautiful. . . . A rare display of some of the best prose written today in this country."
In essay after essay, Didion captures the dislocation of the 1960s, the disorientation of a country shredding itself apart with social change. Her essays not only describe the subject at hand--the murderous housewife, the little girl trailing the rock group, the millionaire bunkered in his mansion--but also offer a broader vision of America, one that is both terrifying and tender, ominous and uniquely her own.
Joyce Carol Oates has written, "Joan Didion is one of the very few writers of our time who approaches her terrible subject with absolute seriousness, with fear and humility and awe. Her powerful irony is often sorrowful rather than clever. . . . She has been an articulate witness to the most stubborn and intractable truths of our time, a memorable voice, partly eulogistic, partly despairing; always in control."

"A slant vision that is arresting and unique . . . Didion might be an observer from another planet--one so edgy and alert that she ends up knowing more about our own world than we know ourselves."
--Anne Tyler

"The story between the lines of Slouching Towards Bethlehem is surely not so much 'California' as it is [Didion's] ability to make us share her passionate sense of it."
--Alfred Kazin